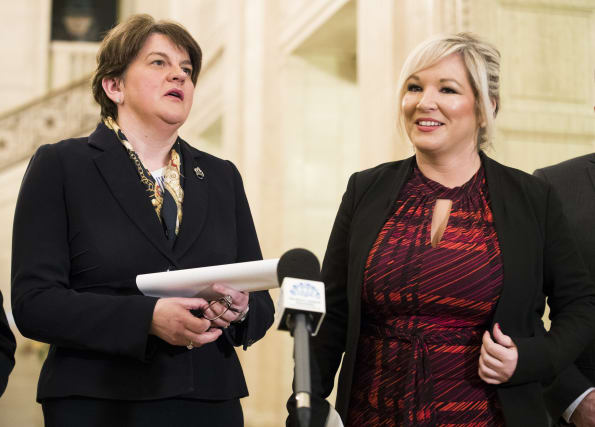 Northern Ireland’s first and deputy first ministers have written to Boris Johnson over the “blockage” of financial commitments underpinning powersharing.

Civil servants in Belfast are preparing detailed costings for pledges the British and Irish governments made in the agreement restoring the devolved institutions, Stormont finance minister Conor Murphy said.

Executive ministers are expecting billions of pounds from the Treasury to finance ambitious plans outlined in the New Decade, New Approach agreement, an accord tabled jointly by the UK and Irish administrations.

Mr Murphy said: “The first and deputy first minister wrote to the Prime Minister yesterday to tell him that we are doing a piece of work, a more detailed piece of work through my department, costing the commitments that the two governments made in the document that they produced last week.

“We want to provide accurate costs for that.

“The Executive is united in terms of its approach to this.”

Parts of Northern Ireland’s infrastructure and wider public services have suffered during the three-year devolution hiatus.

Final resolution of an unprecedented nurses strike which has paralysed parts of the health service is also awaiting confirmation of new funding from the British Government.

Mr Murphy said his officials were working on the detail of the commitments outlined in the agreement.

He said: “Once that work is complete, we will pick that up next week and we may well be over in London talking to people in the Treasury and in Downing Street.”

The deal which sealed the return of the Northern Ireland Executive includes an intention to complete planned stadia programmes.

The construction of a new stadium at Casement Park was badly delayed by safety concerns and objections from residents.

It is intended to be a centrepiece for Gaelic Athletic Association (GAA) games in Northern Ireland.

The project has an overspend of £33 million, a recent Audit Office report said.

Building has still not started three years after the expected completion date.

Communities minister Deirdre Hargey said: “Public safety is not going to be compromised, that is the number one issue, and planning will start to pick up on those other issues that residents have raised, with the decision hopefully pending soon.”