In Pictures: William and Kate head north for first engagement of the decade 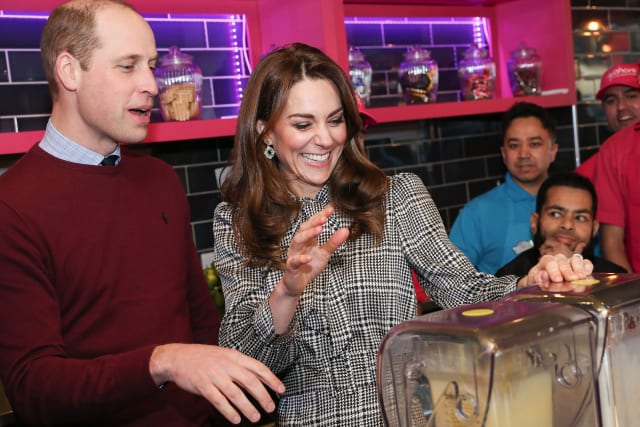 The Duke and Duchess of Cambridge were all smiles as they carried out their first official royal engagement of the decade.

William and Kate visited Bradford in West Yorkshire, where they met fans, chatted to students and made milkshakes.

Underneath, she wore a black and white tartan pattern pussybow dress from high street retailer Zara, which she paired with black pointed court-style heels, a small black bag and gold drop earrings by Zeen.

The Pakistani jewellery designer was favoured by the duchess during their royal visit to Pakistan in October.

First stop on Wednesday was Bradford City Hall, where the royals met students and local employers helping youngsters to get jobs in the community.

Hundreds of well-wishers gathered to see the couple.

The visit came after a tumultuous week for the royal family, with the Duke and Duchess of Sussex deciding to step back as senior royals.

William and Kate met boxer Amir Khan during a visit to the MyLahore restaurant in Bradford. Khan is a friend of the family who run the restaurant. They also tried their hand at making Kulfi milkshakes.

The royals took a tour of the kitchen, and met representatives from the UK Women’s Muslim Council and those whose lives have benefited from the council’s Curry Circle.