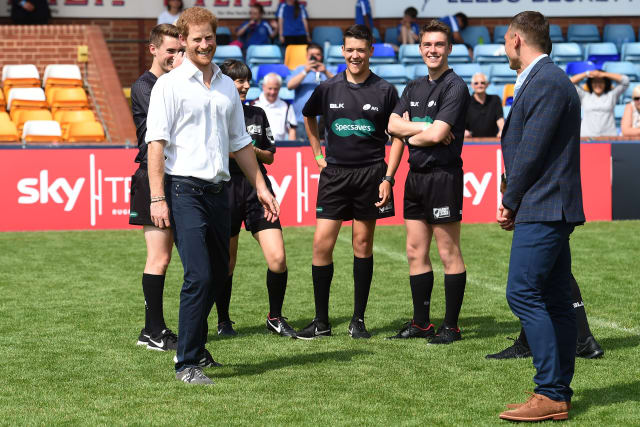 The Duke of Sussex is to conduct his first public engagement since announcing that he and his wife Meghan will be stepping back as senior royals.

Harry will host the Rugby League World Cup 2021 draw at Buckingham Palace on Thursday, where he will meet with representatives from all 21 nations taking part.

The duke will then remain in the UK into next week, despite rumours claiming he was preparing to fly to Canada to be reunited with Meghan and baby son Archie.

The Queen has agreed to the wish of her grandson and his wife to step back as senior royals, become financially independent and split their time between the UK and Canada.

Reports claim the duke is remaining in the UK to hold further discussions about his future role in the royal family, but Buckingham Palace has released no further updates since the Queen’s personal statement on Monday.

A source told the PA news agency: “The duke has some meetings here early next week.”

Harry’s official engagement on Thursday will see him host the Rugby League World Cup draws for the men’s, women’s and wheelchair tournaments.

Prior to the draw taking place, Harry – who was  announced as patron of the Rugby Football League in December 2016 – will watch children from a local school play rugby in the palace gardens.

The draws will be streamed live across the royal family and Rugby League World Cup 2021 Twitter and Facebook channels.

The world cup tournament runs from October 23 to November 27 2021 in 17 cities across England, with 16 men’s, eight women’s and eight wheelchair teams from 21 nations taking part.

In another sign that the duke is attempting to carry on as normal, he launched the next leg of his Invictus Games, for wounded and injured service personnel and veterans, with an Instagram video on Wednesday evening which announced the event will be held in Dusseldorf, Germany, in 2022.

In the footage posted on the official sussexroyal account, Harry said: “I hope everyone in Germany is ready for what will be an incredible week of sport!

“I have no doubt that the German public will get right behind these Games and that every single competitor can expect a warm welcome and an amazing atmosphere.”

The duke and duchess have also dropped their claim to be “internationally protected people” from their website, indicating there may be an issue over their round-the-clock security funded by the taxpayer.

The classification entitled them to the same level of protection offered to heads of state, but the Times reported it was removed from sussexroyal.com a day after the new site was launched last week.

Meghan, who flew back to Canada before senior royals met at Sandringham to discuss the couple’s future on Monday, has been photographed in the province of British Columbia visiting the Downtown Eastside Women’s Centre in Vancouver.

She discussed “issues affecting women in the community”, according to a photograph posted on Facebook by the shelter.

It came as a legal document submitted to the High Court by the publisher of the Mail on Sunday and MailOnline, responding to Meghan’s legal action over an article featuring parts of a handwritten letter to her father, was published.

In the document, the duchess is accused of being more worried about the “unflattering” effect of the publication of letter extracts written to to Thomas Markle than any breach of her data protection rights.

Papers from the duchess’s solicitors have previously said the “true sentiment” of the letter was Meghan’s concern about her father’s welfare and his exploitation by tabloid newspapers which he should stop talking to.

Mr Markle is the main witness for Associated Newspapers and if the case reaches a full court hearing, both Meghan and her father could be called to testify against one another, with the paper’s sister publication the Daily Mail reporting that the retired lighting director would be prepared to face her in court.

The duchess, known as the claimant in legal documents, is seeking damages from Associated Newspapers for alleged misuse of private information, copyright infringement and breach of the Data Protection Act.