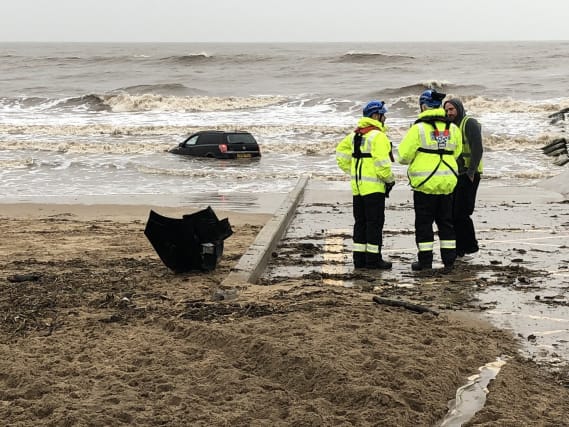 Parts of the UK have been hit by flooding in the wake of Storm Brendan, with some drivers seeing their cars submerged in water.

The Environment Agency has issued flood warnings and alerts across the UK, with coastal areas particularly affected.

The Met Office said there will be a reprieve in conditions on Wednesday.

Weather warnings are no longer in place, but strong winds and rain are expected to return on Thursday.

In Christchurch, Dorset, high tides flooded car parks by the quay, with the same happening in nearby Mudeford.

Local resident Steve Hogen, who filmed the flooding in the early hours of Wednesday morning, told the PA news agency: “I’ve lived in Mudeford for 11 years and I personally think the flooding is getting more often and worse.”

Inland, the River Avon burst its bank in places on Wednesday morning, spilling on to roads near Chippenham, Wiltshire, and leaving some vehicles stranded.

“The B4069 is almost impassable with rising water,” said Paul Hill, 42, from Studley in Warwickshire.

“Lot of very risk-taking drivers out there who seem to be diving headlong into the Avon and being surprised how deep it is.”

Clear-up work has continued in Slough, Berkshire, after high winds blew a roof off a residential and commercial building on to the High Street on Tuesday.

Taxi driver Haris Baig, 30, said he had to slam on his brakes as a large section of roof crashed in front of him, telling PA: “It was a disaster. It was a miracle no-one was killed.”

On Tuesday, a car was pictured in the sea during rising tides in Starr Gate near Blackpool, Lancashire, but was later recovered by the Coastguard.

The Met Office said conditions are set to improve on Wednesday, with a dry and bright day expected for most of the UK except for some showers in the west and in northern Scotland.

However, wet and windy conditions are expected to return on Thursday, beginning in Ireland and Scotland before pushing eastwards across the rest of the UK – with winds of around 50mph to 60mph on the Irish Sea and between 40mph and 50mph inland.

The Met Office added conditions are expected to settle on Friday and into the weekend, but temperatures are predicted to drop – with an average of around 8C across the country.