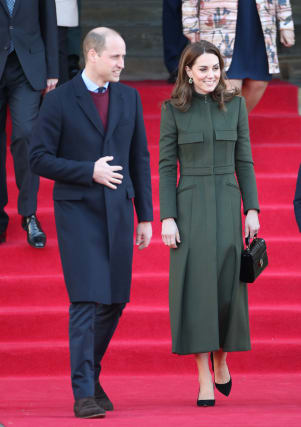 The Duke of Cambridge used his first royal visit of the year to talk about his beloved football team following a tumultuous week for the royal family.

William and Kate arrived in Bradford on Wednesday to cheers from several hundred well-wishers on Centenary Square.

The couple began their visit in West Yorkshire at the City Hall, where they met with students and local employers helping youngsters to get jobs in the community.

After speaking with young people about their career prospects, the duke took the opportunity to speak with local business leaders about Aston Villa FC, a team which he is known to follow.

He agreed that new signing Danny Drinkwater needs “more game time”, before looking round and joking: “I realise we’re going to start talking about football (now).”

William raised concerns about the end-of-season prospects for Villa at Buckingham Palace on Tuesday, when he awarded an MBE to David Gill, former vice-chairman of the FA.

The couple are due to visit a number of projects that promote cohesion within one of the UK’s most diverse cities.

It comes just days after the Queen agreed the Duke and Duchess of Sussex could step back as senior royals and begin a “new life” as an “independent” family.

Following a summit at Sandringham on Monday, Buckingham Palace confirmed Harry and Meghan would begin a “transition period” in which they would split their time between the UK and Canada.

The summit convened by the monarch, which brought together Harry, William and the Prince of Wales, was not attended by Meghan, who is in Canada with baby son Archie.

It also emerged on Tuesday that Meghan’s father could give evidence against her in her legal battle with The Mail On Sunday, should it go to trial.

High Court documents revealed Thomas Markle forms part of the newspaper’s defence, after The Mail On Sunday and its parent company Associated Newspapers were accused of unlawfully publishing a letter between the two.

The visit to Bradford is William and Kate’s first official royal engagement of the decade.

The couple, parents to Prince George, Princess Charlotte and Prince Louis, were last spotted in public together attending a church service on the Queen’s private estate in Norfolk on January 5.

The Pakistani jewellery designer was favoured by the duchess during their royal visit to Pakistan in October.

Hundreds of well-wishers who turned out to catch a glimpse of the royal couple erupted into cheers as the duke and duchess left the 19th-century building.

Kate, who spoke to children waving Union Flags as they left, smiled as one little girl presented her with a small bouquet of flowers.

Following the engagement at City Hall, the duke and duchess will go on to visit one of the city’s Khidmat Centres, which focus on helping the most vulnerable members of the community.

Their final engagement will see them joining a workshop run by Near Neighbours, an organisation that helps people in diverse communities to get to know each other better, build relationships of trust and improve their neighbourhoods.