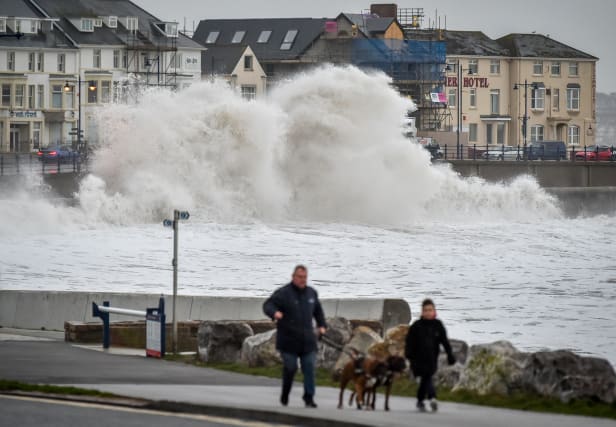 Weather warnings remain in force across the country after Storm Brendan brought winds of nearly 90mph to parts of the UK.

The high winds forced airlines to divert flights scheduled to land at Gatwick Airport, while also causing disruption to ferries and railways.

The strongest gust recorded during Storm Brendan was 87mph in South Uist in the Western Isles of Scotland, with winds of more than 70mph also recorded in Wales and the Isle Of Scilly.

The Met Office has issued four weather warnings across the UK including two for strong winds in north western Scotland and most of England and Wales.

There is also a warning for snow and ice across central Scotland and the highlands.

Met Office spokesman Oli Claydon said on Tuesday that northern and western Scotland will continue to be hit with high winds of 60mph to 70mph from Storm Brendon.

However, a new low pressure front will cause blustery conditions for England and Wales on Tuesday, he added.

Mr Claydon said the high winds and rain could lead to “unpleasant” travelling conditions and cause disruption to roads, trains and ferries.

He added: “We are looking at gusts of 40mph to 50mph with exposed coasts and the tops of hills seeing 60mph and maybe even up to 70mph.

“With that there’s also going to be some rain, making conditions quite unpleasant.

“It’s certainly going to be unpleasant driving conditions and could lead to disruption across many travel networks.”

Seven flights to Gatwick Airport were diverted to other locations across the UK overnight after gales in excess of 40mph struck the area on Monday.

Gatwick said two Wizz Air flights, four easyJet services and one Norwegian Air flight were diverted while one easyJet flight from Edinburgh was forced to land at Birmingham.

In the Western Isles, all schools in Uist and Barra are closed and all bus services on the islands have also been cancelled.

Several Caledonian MacBrayne ferry services are affected, with some services cancelled due to adverse weather and others disrupted.

Northlink Ferries also told passengers there may be disruption on services to Orkney and Shetland.

Gales of up to 80mph affected railways across the country on Monday, while drivers were advised to take extra care on the roads.

After plaguing parts of Ireland, causing thousands of homes and businesses to lose power, the storm brought high winds to parts of England and Scotland.

Seven flood warnings and 79 alerts issued by the Environment Agency remained in place on Tuesday morning.

The Met Office has also issued a yellow warning of rain to cover the South East on Tuesday, where heavy rain is expected to cause disruption and the flooding of a few homes and businesses is “likely”.