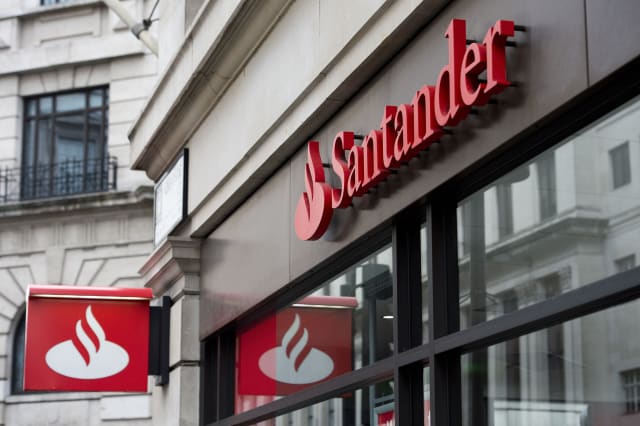 Santander is slashing the interest paid to holders of its flagship 123 current account and imposing a new overdraft rate of 39.9%.

Cashback paid on household bills on the 123 current account and the 123 lite, select and private current accounts will also be capped at £15 per month.

Santander used to pay as much as 3% interest on its 123 deal – meaning the account was often seen as a haven for savers in the low interest rate environment. The rate was previously halved to 1.5% in 2016.

In response to new Financial Conduct Authority (FCA) rules coming into force in the overdraft market in April, Santander also said that, from April 6, it will introduce a single overdraft rate of 39.9%.

All of its on-sale adult current accounts will charge this for overdraft borrowing, except Santander’s Choice Account, which will have a lower rate of 29.9% with interest capped at £20 per month.

But there is a monthly charge of £10 for this account – meaning customers would pay a maximum of £30 per month.

“However, recently, as the best easy access savings rates have plummeted to 1.36%, it was looking good again.

“In fact only last week I suggested those who wanted easy access savings and had big bills check it out. So either Santander has missed an opportunity to capitalise, or it just doesn’t want the business.”

Santander said nine in 10 customers will be unaffected by the cashback cap.

It also said its new overdraft rate will see six out of seven overdraft customers paying less than they are currently.

Several banks have already announced new overdraft rates of nearly 40% as they prepare to comply with the new FCA rules, which will mean providers will be stopped from charging higher prices for unarranged overdrafts than for arranged overdrafts.

The new rules from April 6 will ban fixed fees for borrowing through an overdraft, calling an end to daily or monthly charges – with the aim of making overdraft charges clearer and easier to compare so that people can shop around.

HSBC, First Direct and M&S Bank will all introduce rates of 39.9% from March 14.

NatWest will charge up to 39.49% for overdraft borrowing and its changes will take effect from March 27.

Barclays will introduce changes from March 22, with a new new overdraft rate of 35%.

Some banks already charge the equivalent of more than 39.9% annual interest in fixed fees – but, because of firms’ different overdraft charging structures, costs can be hard to compare.

Rachel Springall, a finance expert at Moneyfacts.co.uk, said: “It seemed inevitable that Santander would need to review the benefits it offers on its current account range in light of the FCA ban on flat overdraft fees.”

She said the FCA’s fixed fee ban “should be celebrated as it will generally mean a decent saving for consumers who are the most vulnerable and fall into an unarranged facility.

“However, the changes have led to banks and building societies charging high interest rates on overdrafts, so it could be cheaper for consumers to use a credit card for short-term borrowing instead.”

Ms Springall continued: “The FCA flat fee ban should incentivise consumers to check whether their current account is charging them a fair rate for overdrafts and if the account overall is working hard enough for them.

“If the deal overall is no longer lucrative then they would be wise to take advantage of the Current Account Switch Service and move to an alternative account which offers a better deal overall.”

Susan Allen, head of retail banking at Santander, said: “While we have had to make some difficult decisions in the current environment, our current account range remains very competitive.

“Our flagship 123 current account continues to offer great value, with customers able to earn up to £379 per year in interest and cashback for an account fee equivalent to just £60 a year, while 123 lite customers can earn up to £180 a year in cashback for a fee of just £12 a year.

“Our 123 accounts provide a range of benefits that we know our customers value and our goal is to ensure these accounts remain sustainable for the future.”