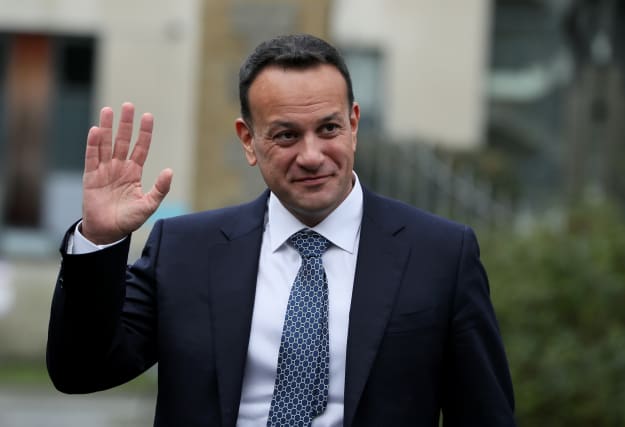 Remarks by Taoiseach Leo Varadkar ahead of dissolution of Irish Parliament before a General Election on February 8:

“This morning I informed the Cabinet that I will ask the President to dissolve the 32nd Dail.

“I shall travel to the Aras to do so later this afternoon.

“I have always said that the election should happen at the best time for the country.

“Now is that time.

“We have a deal on Brexit, and, after the positive vote in the House of Commons last Thursday, it is now certain that the UK will leave the EU on the January 31 in an orderly fashion.

“There will be no hard border, citizens’ rights will be protected, and the Common Travel Area will remain in place.

“The Northern Ireland Assembly and Executive have reconvened.

“However, Brexit is not done yet. In fact, it’s only half-time.

“The next step is to negotiate a free trade agreement between the EU including Ireland and the United Kingdom that protects our jobs, our businesses, our rural communities and our economy.

“The capacity to do everything else that needs to be done – health, housing, climate action, tax reform – depends on achieving this outcome.

“And, it has to be done by the end of the year.

“There exists now a window of opportunity to hold a General Election and to have a new Government in place before the next European Council meeting in March with a strong mandate to focus on these negotiations into the summer and autumn.

“In deciding not to seek agreement on a date for an election in April or May, I do so knowing that, even if this was possible, we would effectively enter into a three to four month election campaign.

“During this time there’s a risk that difficult decisions would be deferred and irresponsible promises made.

“That would not be in the interests of our country.

“It has been a privilege to lead this country as your Taoiseach for the last two and half years.

“Thank you for that honour and for your trust in me.

“We have a deal on Brexit and in Northern Ireland.

“Our economy has never been stronger.

“There are more people at work than ever before, incomes are rising, poverty is falling and the public finances are back in order.

“As a nation, we have every reason to be hopeful about the future.

“People want their Government to do much more.

“And I want us to do much more.

“Many people don’t feel the strength of our economy in their pockets and they don’t see it in their payslips or in their towns and parishes.

“We have a plan for fairer taxes – for future jobs and for rural Ireland – to put that right.

Many people are frustrated about the pace of progress in housing and health.

“We share that frustration and I look forward to sharing our plans to build on what has been done, with a particular focus on homeownership and universal healthcare.

“We are beginning to make real headway on climate action and the environment.

“We’re no longer a laggard but we are still far from being a leader.

“We have much to do.

“Many families struggle with the cost of living – so we have plans to ease the burden and help families who we believe should be at the centre of our society.

“The election will be held on Saturday February 8.

“In holding the General Election on a Saturday for the first time, I do so knowing the inconvenience to families of a polling day on a weekday during school term – time off work, lost income, increased childcare costs.

“I also want to make it easier for students and those working away from home to cast their votes.

“Before I finish, I want to thank the Independent Alliance and the Independent Ministers who have contributed so much to our country by having the courage to join us in Government.

“Now I seek a fresh mandate so we can continue to build a better future.

“A future we can all look forward to.

“We have the team.

“We have the track record.

“We have the plans.