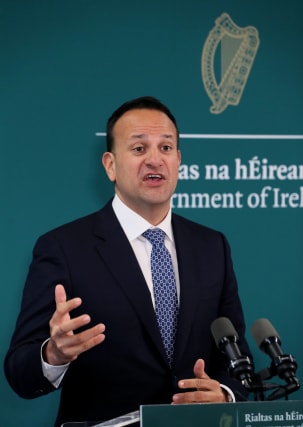 The Irish Premier has said he wants a fresh mandate as Brexit is only at “half time” as he announced a General Election will be held on February 8th.

At a press conference at Government buildings on Tuesday, Mr Varadkar put Brexit and his party Fine Gael’s handling of the economy at the forefront of his speech.

His party’s slogan for the upcoming election will be A Future To Look Forward To.

“We have a deal on Brexit, and, after the positive vote in the House of Commons last Thursday, it is now certain that the UK will leave the EU on the January 31 in an orderly fashion.

“However, Brexit is not done yet.

“In fact, it’s only half-time.

“The next step is to negotiate a free trade agreement between the EU including Ireland and the United Kingdom that protects our jobs, our businesses, our rural communities and our economy.

“The capacity to do everything else that needs to be done – health, housing, climate action, tax reform – depends on achieving this outcome.

“And, it has to be done by the end of the year.

“There exists now a window of opportunity to hold a General Election and to have a new Government in place before the next European Council meeting in March with a strong mandate to focus on these negotiations into the summer and autumn.

“In deciding not to seek agreement on a date for an election in April or May, I do so knowing that, even if this was possible, we would effectively enter into a three to four month election campaign.

“During this time there’s a risk that difficult decisions would be deferred and irresponsible promises made.

“That would not be in the interests of our country.”

Health Minster Simon Harris told reporters in Dublin the election will give Fine Gael a chance to highlight the leadership Mr Varadkar and Irish Foreign Affairs Minister have provided during the Brexit negotiations.

“That is just not recognised in our own country but internationally as well. When it comes to Brexit we’re only halfway there.

“We have a very important body of work to do this year in relation to  trade deal that will affect business, families and farms and people right up and down the country,” he said.