A Highland cow caused rush-hour delays to trains around Glasgow after escaping from a country park.

Rail operator ScotRail initially tweeted about "reports of a couple of Highland Cows on the railway line at Busby", in East Renfrewshire, at 8.48am on Tuesday. 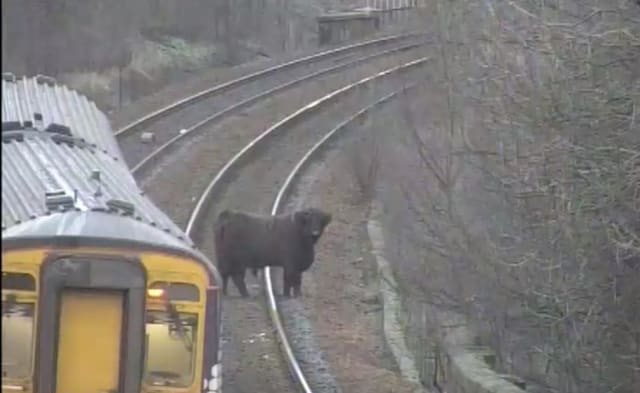 However, at least one of the animals, described as an "absolute unit", was spotted on the tracks at Pollokshaws West, which is on the same line and near Pollok Country Park.

In a series of tweets, ScotRail said: "We've had reports of a couple of Highland Cows on the railway line at #Busby. We think they're on the run from Pollok Park... We'll get them moooooved as soon as we can. Thanks for your patience.

"Absolute unit spotted on the track at Pollokshaws West. Sorry if you're being delayed due to this.

"@NetworkRailScot track staff on their way to attempt to encourage these coos to mooove back to the park.

"It's not safe to attempt to pass the area at the moment. In this picture, you can see trains on both tracks are being held. We really appreciate your patience if you're on board either train or at a station waiting."

The firm also said "services are being disrupted into Glasgow Central High Level at the moment due to several line issues across the Network".

Network Rail said: "Our teams are beginning to arrive on site to deal with this issue and mooove this Highland Coo so trains can run again safely."

A Glasgow City Council spokeswoman said the cow had been "retrieved safely" by staff from the park just before 10am.

She added the council was in contact with ScotRail to determine where the creature "breached the fence" and was also checking if it was more than one animal, with reports of a cow's appearance in Busby.