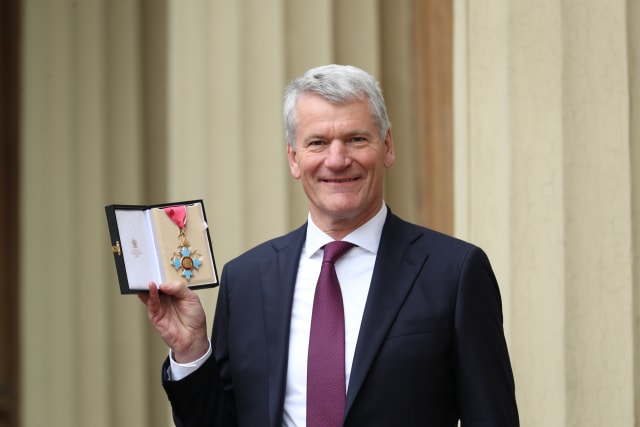 The Duke of Cambridge is concerned about the end-of-season prospects of his beloved football team, according to the vice-chair of the FA.

William is a known follower of Aston Villa, who are currently in 18th place in the Premier League and facing relegation with 21 points.

The future king made the comments as he met FA vice-chair, and former Manchester United chief executive David Gill, who was collecting a CBE at Buckingham Palace.

Mr Gill said: “I’ve been lucky enough to meet (William) a few times and talk about football, he was more worried about Aston Villa and how they’re going to finish this season.”

“We had a nice chat about football, he’s a keen follower of it.”

William was photographed with his family at a Villa match last year.

Mr Gill, who collected his gong for services to football on Tuesday, also addressed fans concerns about controversial technology, VAR.

He added: “VAR is with us, we’re not going to roll back, but I think there certainly can be improvements.

“We will learn from the mistakes this year, and make sure that in five years time we’re not talking about Var, because I think that can be the case.”

The video assistant referee has been introduced into the Premier League but Mr Gill said the system will take a while to get used to.

He explained: “Let’s not rush it, it’s a major change.

“When referees get trained from the start in VAR, the fans understand it more, the players, I think we can look forward to positivity with it”.

After several seasons of dominance from his cross-town rivals, Manchester City, the United fan said he was “confident with the resources and management” of his club, and called on them to fight to get back into the top spots.

He said: “City have set the bar, and Liverpool look like they’re going to set another bar.

“The Premier League is the best league in the world, its very competitive, its up to teams like my own, Manchester United, Chelsea, and Spurs to challenge and get back up there.”