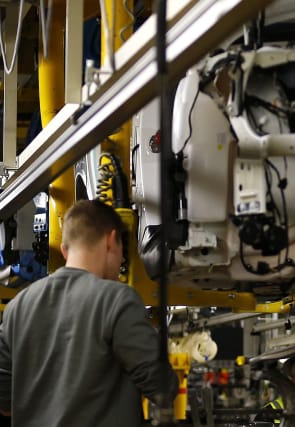 The UK economy slid into decline in November on the back of weakness in the manufacturing sector, according to official figures.

Economists had predicted that the economy would remain flat with zero growth for the month.

The three-month figure represented an improvement on analyst predictions, having forecast a decline of 0.1%.

Rob Kent-Smith, head of GDP at the ONS, said: “Overall, the economy grew slightly in the latest three months, with growth in construction pulled back by weakening services and another lacklustre performance from manufacturing.

“The UK economy grew slightly more strongly in September and October than was previously estimated, with later data painting a healthier picture.

“Long term, the economy continues to slow, with growth in the economy compared to the same time last year at its lowest since the spring of 2012.”

GDP decline in November was heavily driven by continuing troubles in the manufacturing sector, which saw output fall 1.7% during the month, according to the new figures.

The services sector also reported a decline, although notably more modest, at 0.3% for the month.

However, construction output returned to strong growth, with output increasing by 1.9% during November after 2.2% decline was reported a month earlier.

Chris Williamson, chief business economist at IHS Markit, said: “The latest GDP data adds to signs that the UK economy stagnated at best in the fourth quarter of last year as heightened political uncertainty, Brexit risks and weaker global demand all colluded to dampen spending by both business and households.

“The good news is that all these headwinds are showing signs of moderating, if not even turning into tailwinds, as we move into 2020. However, downside risks remain elevated.”

The confirmation of monthly economic decline comes after a Bank of England policymaker suggested he could vote for an interest rate cut if GDP fails to pick up.

Gertjan Vlieghe told the Financial Times: “Personally I think it’s been a close call, therefore it doesn’t take much data to swing it one way or the other.”