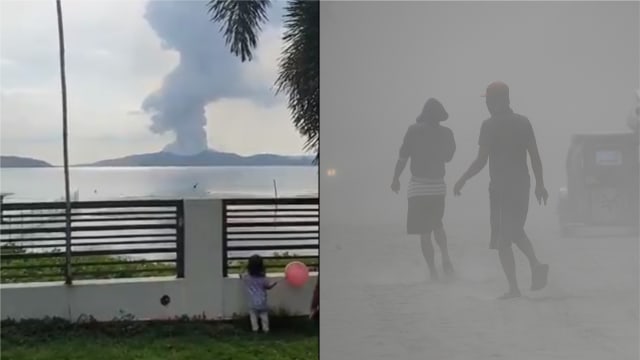 A British holidaymaker confined to his hotel by ash has described the “humbling, amazing and worrying” eruption of Taal volcano in the Philippines.

Flights from Manila, the Filipino capital, have been disrupted since the eruption began on Sunday and the Foreign Office is advising against travel to the nation.

Ewan Carroll, originally from Dunblane, Scotland, was awoken by tremors on Sunday morning while on an anniversary weekend away in Tanauan, Batangas.

“I was lying in bed upstairs in a beautiful lakeside villa when I felt the house shake,” the 44-year-old told the PA news agency.

“After a few tremors, I went downstairs and saw the enormous column of smoke.

“It was humbling, amazing and worrying all at once.”

Mr Carroll, who has worked in Brisbane, Australia as a primary school teacher for the past 15 years, says they quickly left the villa and are now at a hotel in Manila 37 miles away.

“I have asthma and so even in Manila we are confined to the hotel because of the ashfall all around which (Philippines authorities) reported as dangerous.

“We have a one-and-a-half-year-old daughter who we also worry about as the face masks are too big for her.”

There have yet to be any casualties or major damage reported due to the eruption, but ash has been blown more than 62 miles, coating the area

Filipino student John Tugade, 22, is from the town of Taal, just south of the island volcano, and told the PA news agency: “Taal Volcano erupting consisted of frequent earthquakes as well as thunderous roars.

“If you were at the scene, you could hear the subtle eruption sounds as well as see the lightning that crackles around the spiral of smoke.”

Experts have warned the eruption could get worse in the coming days and Philippine authorities plan to evacuate hundreds of thousands from the area.

All flights were initially halted at Ninoy Aquino International Airport, cancelling more than 500 flights, but the transport hub partially reopened on Monday.

“Although we are not scheduled to fly out until Monday 20, it’s unclear when the ash cloud will dissipate enough for flights to resume,” Mr Carroll said.

“So, in a nutshell, worrying times still lie ahead.”

The Foreign Office said in a statement: “The Philippines’ authorities are currently recommending evacuation of an area within a 14km radius of the Taal main crater.

“Also be aware that, due to this, flights in and out of Manila international airport are subject to disruption.

“You should consult your carrier.

“In addition, the ash cloud is over Metro Manila and local government authorities in Manila have begun to advise staying indoors while ash is falling.”