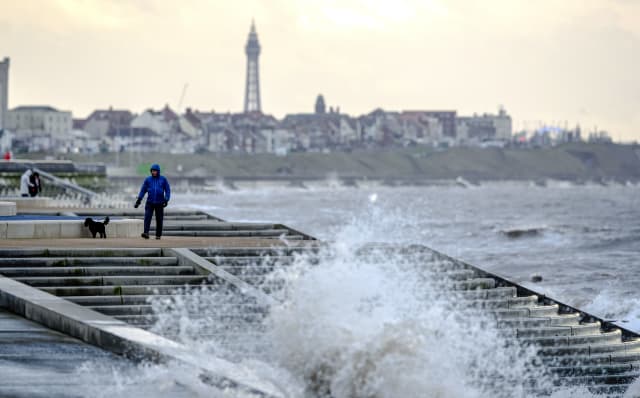 Storm Brendan has struck parts of the UK, with gusts of up to 80mph and heavy rainfall expected to sweep across the country.

A yellow wind warning issued by the Met Office – covering the west of the UK, the island of Ireland and the north-east coast of Scotland – is expected to stay in place until midnight.

Drivers are being advised to take extra care on the roads during the hazardous conditions, which reportedly caused a trampoline to blow on to the M7 motorway near to Limerick.

The Republic of Ireland is predicted to be worst affected, after Met Eireann, the Irish National Meteorological Service, put out an orange wind warning for the entire country.

Around 48,000 homes and businesses were without power on Monday afternoon, while power cuts were also suffered across Northern Ireland, mostly in the North East.

Poor weather which has plagued the west is expected to sweep eastwards on Monday evening.

Meteorologist Helen Roberts, from the Met Office, said road conditions "could be quite nasty" for commuters during rush hour.

Surface water on the roads from heavy rain throughout the afternoon has the potential for "really nasty conditions", she said, while the AA advised drivers to take extra care due to fallen branches and debris.

The Met Office warned that some delays to road, rail, air and ferry transport could be expected, particularly for high-sided vehicles on exposed routes and bridges, as well as some short-term loss of power and other services.

Here is the latest satellite and radar image as #StormBrendan brings wet and windy conditions across the UK #WeatherAwarepic.twitter.com/kyp2hcbokf

Great Western Railway said services between Plymouth and Penzance will run at a reduced speed until the end of the day due to strong winds.

Lines have reopened at Preston following severe weather conditions on Monday morning caused debris to fall from the station roof on to the tracks, according to Network Rail.

An 87mph gust was recorded on South Uist in the outer Hebrides at 2pm on Monday, the strongest in the UK so far, while a 76mph gust hit Capel Curig in Wales.

The Scottish Environment Protection Agency (Sepa) has issued 25 flood warnings and 16 flood alerts around the country, warning of a risk of coastal flooding.

Several Caledonian MacBrayne ferry services were affected, with some services cancelled due to adverse weather and others disrupted, while NorthLink Ferries told passengers there may be disruption on services to Orkney and Shetland.

The blustery and wet conditions could continue to bring widespread disruption on Tuesday, as the Met Office has issued another yellow weather warning of wind covering much of England for a 12-hour period.

A yellow rain warning of rain has also been issued for south-east England on Tuesday afternoon, which is expected to be in place until Wednesday morning.

"It is actually a different area of low pressure, although it is all sort of wrapped up in Storm Brendan," Ms Roberts said.

"The winds could well be as strong tomorrow, we could see 40-50mph winds inland."