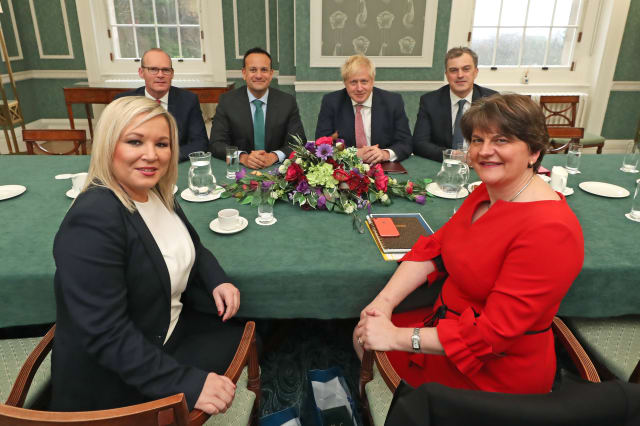 The Prime Minister has been urged to keep his word and deliver a multibillion pound funding windfall to support the restoration of powersharing in Northern Ireland.

Mr Johnson, who was joined by Taoiseach Leo Varadkar as they marked the return of the institutions, insisted the Government had made “huge commitments” to the new executive, but would not be drawn on the amount.

But he added: “Yes of course we’re going to be supportive, but the point I want to make is that it’s not just about money, it’s about leadership, and what’s so great about today is, as I say, that Northern Ireland politicians have put aside their differences, stepped up to the plate and shown leadership, and that is a fine thing and the right thing.”

The executive ministers are expecting billions of pounds to be stumped up by the Treasury to finance the ambitious plans outlined in the New Decade, New Approach agreement – an accord tabled jointly by the UK and Irish governments.

Much of it will be used to address the multiple problems that have beset public services in the region during the three-year powersharing impasse.

On Monday, Mr Johnson indicated funding for healthcare would be delivered through Barnett consequentials – the formula for distributing money to the devolved regions – but did not make clear whether there would be any additional cash.

Ms Foster said the Prime Minister had to keep his word on funding commitments made during the negotiations.

“He must deliver,” she said. “We have stepped up to the plate in relation to the political agreement.

“He put forward an agreement, he asked us to sign up to it. We have all signed up to it and come into a multi-party executive, therefore it is now incumbent on the Prime Minister to step up to the plate in relation to financial resources.”

Stormont ministers are wary the Government may make funding dependent on commitments from the executive to raise extra revenue.

Ms Foster said ministers would look at options to raise money locally, but she ruled out the introduction of water charges in the region.

Ms O’Neill stressed the importance of securing the Treasury funding.

She said: “All executive ministers are committed to working together to tackle some very serious issues in our society and across public services. But, quite simply, we need the money to make it happen.

“We have done our bit and I look forward to the fulfilment of the commitments made by the two governments to let us get to work.”

During his visit, Mr Johnson hailed the “wonderful” compromise that triggered the return of powersharing.

“Never mind the hand of history on my shoulder… I see the hand of the future beckoning us all forward,” he said.

“And I hope that with goodwill and compromise and hard work on all sides it will be a very bright future indeed.”

The Taoiseach said it was a “really good day for Ireland and the UK”.

“Powersharing here in Northern Ireland, North South co-operation, is going to resume, and we’re going to beef up and deepen co-operation between Britain and Ireland in the interests of everyone who lives on these islands.”

The parties sealed an accord restoring the devolved institutions following a three-year suspension which has seen public services like health and education suffer.

“I want to say how grateful I am to all the parties, and everybody here in Northern Ireland, for the way they have compromised and the way they have worked together to get Stormont up and running again,” Mr Johnson said.

“It’s shown a willingness to trust each other and to set aside difference, and I think it’s absolutely commendable and wonderful to see.”

Stalled legacy mechanisms related to Troubles killings, agreed by the region’s parties as part of the 2014 Stormont House Agreement, are finally set to be implemented as part of the deal to restore powersharing.

They include an independent investigation unit to establish if any prosecutorial opportunities remain, and a truth recovery body to help families find out more details about the deaths of their loved ones in cases where prosecutions are unlikely.

Mr Johnson was asked about the prospect of more veterans being prosecuted.

He stood by the Conservatives’ general election manifesto pledge to protect armed forces veterans from the 30-year conflict from unfair prosecutions without new evidence.

The Prime Minister said the Stormont parties had done a good job balancing that with giving confidence to victims of violence who are seeking answers.

He said it is vital that public spending is properly monitored to ensure no repeat of the botched and overspending green energy scheme that caused the Stormont collapse three years ago.

He acknowledged there could be checks on goods crossing the Irish Sea that were destined for the Republic of Ireland as a result of Brexit, but insisted a deal with Brussels could mean they are not necessary.