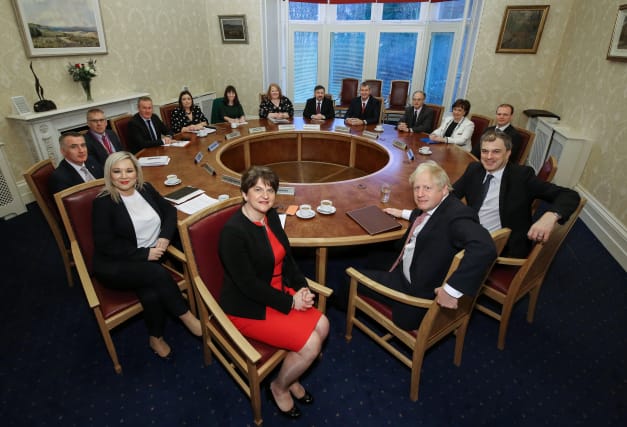 He said healthcare would be a priority for “huge commitments” in investment coming from central government, as part of the deal to restore devolved powersharing in Belfast.

The Prime Minister met the new first and deputy first ministers, Arlene Foster and Michelle O’Neill, at Stormont on Monday.

He declared: “Never mind the hand of history on my shoulder… I see the hand of the future beckoning us all forward.

“And I hope that with goodwill and compromise and hard work on all sides it will be a very bright future indeed.”

He stood by the Conservatives’ general election manifesto pledge to protect armed forces veterans from the 30-year conflict from unfair prosecutions without new evidence coming forward.

The Prime Minister said the Stormont parties had done a good job balancing that with giving confidence to victims of violence who were seeking answers.

Mr Johnson said it was vital that public spending was properly monitored to ensure no repeat of the botched and overspending green energy scheme which caused the Stormont collapse three years ago.

He acknowledged there could be checks on goods crossing the Irish Sea that were destined for the Republic of Ireland as a result of Brexit, although he insisted that a deal with Brussels could mean they were not necessary.

“I cannot see any circumstances whatever in which there would be any need for checks on goods going from Northern Ireland to GB.

“The only circumstances in which you could imagine the need for checks coming from GB to NI – as I have explained before – is if those goods were going on in to Ireland, and we had not secured, which I hope and am confident we will, a zero-tariff, zero-quota agreement with our friends and partners in the EU.”

Taoiseach Leo Varadkar is also due at Stormont on Monday, as he and Mr Johnson mark the resurrection of the institutions after a three-year political impasse.

Ahead of Mr Johnson’s arrival, a Stormont minister said he expected the Government to deliver at least £2 billion to support the powersharing deal.

The UK Government made a series of financial promises as part of efforts to get the “New Decade, New Approach” agreement over the line.

Northern Ireland Secretary Julian Smith, who helped broker the deal, pledged major investment to alleviate problems in the region’s struggling public services, but declined to confirm the sums involved until devolution was restored.

Ministers are now keen to get those figures nailed down.

They will need to hit the ground running to tackle a host of acute problems facing a public sector that has been floundering amid the 36-month governance vacuum.

Top of the executive’s in-tray is an industrial dispute in the health service that has seen nurses take strike action on three occasions in the last month.