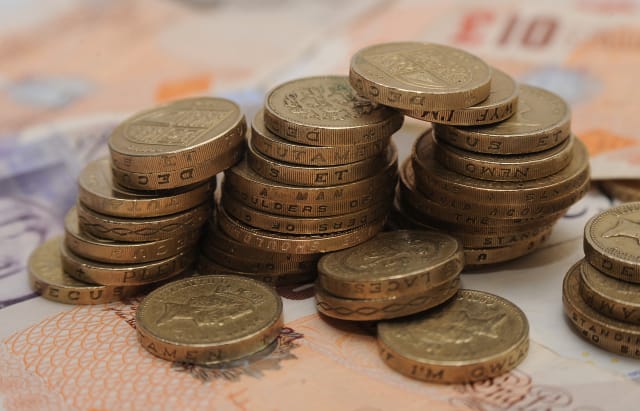 London’s top index was the mirror image of the pound on Monday, as the currency dropped on poor economic data out of the UK in the morning.

The two often move in reverse to each other. When the pound strengthens it pushes down the FTSE, which contains many companies which rely on exports for their revenues.

It marks the pound’s lowest point in about two weeks.

“The monthly GDP reading for November printed significantly worse than expected at minus 0.3% with the manufacturing sector acting as the biggest burden on the economy amid continued Brexit uncertainty and slow global demand.”

It came as traders kept one cautious eye on trade news from the US and China.

The world’s two largest economies are set to sign a deal later this week, after a long-running tariff war.

However, there was scarce new news on Monday, having little effect on markets, said David Madden at CMC Markets.

“Equity markets have gained major ground in recent months on the back of the trade story, and now it seems that traders are content to sit on their hands until the agreement has been made official,” he said.

London’s utilities sector was buoyed by reports that Pennon is planning to sell its waste management arm. The company closed the day up 7.1%, and helped to drag up Centrica, United Utilities and Severn Trent by more than 2% each.

Brent crude, the international oil standard, fell 1.08% to 64.32 dollars per barrel as tensions seem to ease between the US and Iran.

In company news, shares in Savills closed up 7.22% to 1,232p after the estate agency said it saw the UK commercial and residential markets pick up after last month’s general election.

The real estate business said its full-year results for 2019 will be at the “upper end” of expectations, following an “excellent” performance in the UK.

It said Brexit uncertainty had restrained UK growth until mid-December, but saw “a strong close to the year as confidence to transact returned to the market”.

The City Pub Group, which owns and runs 47 pubs across southern England and Wales, warned that annual profits will be below expectations.

Bosses at the chain said a series of external problems hit the business, while an expected boost from the Rugby World Cup failed to materialise.

Meanwhile, William Hill closed up 0.9% to 186p, as it said profits for the past year are expected to have surpassed expectations, after it was buoyed by favourable sporting results in December.

The gambling giant said this helped to boost its retail division and increase total group profits.

It expects operating profits from continuing operations in 2019 to have been between £143 million and £148 million.