In Quotes: Harry and Meghan, in their own words, on royal duty 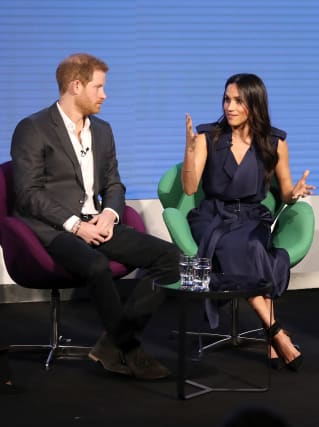 The Duke of Sussex has always struggled with his royal role.

Happier in the Army when he was plain Captain Harry Wales, he once confessed he “wanted out” of the Windsors, but said then he had decided to stay and work out his place.

Both Harry and Meghan Markle, now the Duchess of Sussex, pledged their commitment to royal duty ahead of their wedding.

Now the couple plan to quit as senior royals.

As the Queen, the Prince of Wales, the Duke of Cambridge and Harry gather for a summit on the crisis, here’s a look at what Harry and Meghan have said about their royal roles and their experiences as members of one of the world’s most famous families.

“I felt I wanted out but then decided to stay in and work out a role for myself.” – in 2017 to Newsweek magazine about considering leaving the royal family.

“We are not doing this for ourselves but for the greater good of the people. Is there any one of the royal family who wants to be king or queen? I don’t think so, but we will carry out our duties at the right time.” – again in 2017.

“You’ll be glad to know, probably not.” – when asked by a schoolboy if he would ever be king.

“Great!” – when it was suggested to him when Kate was pregnant with Princess Charlotte that this further reduced his chances of being king.

“There are three mes. One in the Army, one socially in my own private time, and then one with the family and stuff like that. So there is a switch and I flick it when necessary.” – on the different sides to his character, speaking on his return from Afghanistan in 2013.

“Definitely. I’ve always been like that.” – asked whether he was more comfortable being Captain Wales rather than Prince Harry in 2013.

“My father’s always trying to remind me about who I am and stuff like that. But it’s very easy to forget about who I am when I am in the Army.” – in 2013.

“There’s a lot of times that both myself and my brother wish, obviously, that we were just completely normal.” – in 2012.

“I don’t get any satisfaction from sitting at home on my arse.” – on looking for the right role after leaving the Army.

“She had more guts than anybody else. I want to carry on the things that she didn’t quite finish.” – on his mother Diana, Princess of Wales.

“I’d probably live in Africa. I’d like to spend all my time out there… As a job, it would probably be a safari guide.” – on what he would do if he were not a prince.

“I still view her more as the Queen than my grandmother. You have this huge amount of respect for your boss and I always view her as my boss – but occasionally as a grandmother.” – to the BBC about the Queen to mark her 90th birthday.

“It’s amazing how close we’ve become. I mean ever since our mother died, obviously we were close, but he is the one person on this earth who I can actually really … we can talk about anything.” – to the PA news agency about William in his 21st birthday interview in 2005.

“I am who I am. I’m not going to change because I’m being criticised in the press.” – 21st birthday interview with PA.

“The majority of the stuff is created out of nothing but as brothers, you know, you have good days, you have bad days.” – about William in 2019.

“Working as family does have its challenges, of course it does… the fact everyone is laughing means you know exactly (what I mean) – but we’re stuck together for the rest of our lives.” – at the 2018 forum for the Royal Foundation which Harry and Meghan later split from.

“After many months of reflection and internal discussions, we have chosen to make a transition this year in starting to carve out a progressive new role within this institution.” – the Sussexes’ bombshell statement on January 8 2020.

“We intend to step back as ‘senior’ members of the royal family and work to become financially independent, while continuing to fully support Her Majesty The Queen.” – the decision to quit as senior royals.

“I’m not so much searching for someone to fulfil the role, but obviously, you know, finding someone that would be willing to take it on.” – on looking for love in 2012, prior to meeting Meghan.

“For me, it’s an added member of the family. It’s another team player as part of the bigger team, and for all of us, all we want to do is be able to carry out the right engagements.” – on Meghan joining the royal family.

“I still had to have some pretty frank conversations with her to say, you know what you’re letting yourself in for, is… it’s a big deal and it’s not… it’s not easy for anybody.” – on preparing Meghan for royal life.

“At the moment for us, it’s going to be making sure our relationship is always put first.” – on their priorities for the future.

“But both of us have passions for wanting to make change, change for good, and with lots of young people running around the Commonwealth, that’s where we’re going to spend most of our time hopefully.” – on their priorities in the engagement interview.

“Unfortunately, my wife has become one of the latest victims of a British tabloid press that wages campaigns against individuals with no thought to the consequences – a ruthless campaign that has escalated over the past year, throughout her pregnancy and while raising our newborn son.” – in a statement in 2019.

“I’m excited to just really get to know more about the different communities here, smaller organisations who are working on the same causes that I’ve always been passionate about under this umbrella, and also being able to go round the Commonwealth, I think it’s just the beginning.” – in her engagement interview about life in the UK.

“I don’t see it as giving anything up. I just see it as a change.” – on quitting acting to become a full-time royal.

“The family has been great, and over the past year and a half we’ve just had a really nice time getting to know them and progressively helping me feel a part of, not just the institution, but also part of the family which has been really special.” – on getting to know the royals in 2017.

“For me, it’s very important to want to hit the ground running.” – Meghan setting on her goals at the first and only Royal Foundation forum.

“When I first met my now-husband, my friends were really happy because I was so happy, but my British friends said to me, ‘I’m sure he’s great but you shouldn’t do it because the British tabloids will destroy your life’.” – in the ITV documentary in Africa 2019.

“I think I really tried to adopt this British sensibility of a stiff upper lip… but I think what that does internally is probably really damaging.” – in Africa.

“Thank you for asking, because not many people have asked if I’m OK.” – in Africa.

“I’ve said for a long time to H — that’s what I call him — it’s not enough to just survive something, right? That’s not the point of life. You’ve got to thrive, you’ve got to feel happy.” – in Africa.