The saga of Harry and Meghan plays out in the papers 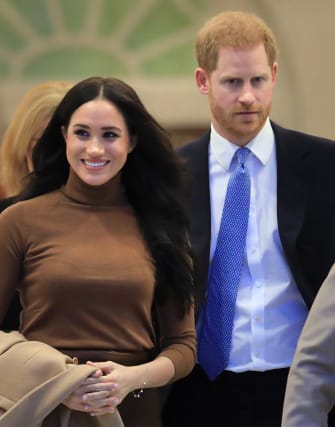 Sunday's newspaper front pages and broader coverage is dominated again by news and opinion about the Duke and Duchess of Sussex, though most sources are anonymous.

The Sunday Mirror's front page splash reports that Harry and Meghan told Elton John about their plans to step back from senior royal responsibilities before they told the Queen.

Responding to the claim, a spokesperson for Sir Elton told the PA news agency: "Elton supports the fact that Harry and Meghan are admirably taking control of their own lives.

"He cares about them both and their family deeply and is fully supportive of any decisions the couple make, knowing they are made by them alone, without outside influence and with their future happiness and wellbeing in mind."

"As the crisis continues, it is understood Meghan, 38, was left feeling so cut off from the royals that she and her sister-in-law Kate severed all communication on a family WhatsApp chat group," the People's story adds.

The Mail on Sunday reports that the Sussexes "will be confronted with the dire financial impact of abandoning the royal family at an extraordinary Sandringham summit" on Monday.

Unnamed sources have told the paper that "royal aides and Government officials have drawn up a range of scenarios setting out the 'stark implications' faced by Harry and Meghan if they abandon or dramatically scale back their royal duties – including a major tax trap".

Meghan's "decision to move to Canada could affect her application to obtain British citizenship under Home Office rules," The Sunday Telegraph reports.

"The American citizen is required to prove that she has not spent more than 270 days outside the UK in the three years leading up to the day her application is formally lodged," it adds.

The Observer, in its editorial, uses the situation to call for changes in how the royal family operates.

"The Queen's stature and popularity mean abolition remains a distant
prospect," the editorial says. "But Harry and Meghan's announcement should act as the catalyst for the scaling back of this unwieldy institution.

"Some of its supporters undoubtedly hoped that a mixed-race woman marrying in was the sign of an institution modernising to survive. That it so clearly has not worked instead serves to show that its long-term survival remains in doubt."

The Sunday Express splashes about on Monday's "Showdown at Sandringham", reporting: "A royal source said that before the meeting they will all have read proposals put together jointly by their staff after crisis talks this weekend."

"The request for this to be resolved at pace is still Her Majesty's wish. The aim remains days, not weeks. However there is a genuine understanding that any agreement will take time to be implemented."

And the Daily Star Sunday says that the duchess will join Monday's emergency meeting on what it calls an "abdication crisis" via video link from Vancouver Island.

Given that the west coast of Canada is eight hours behind UK time, this would suggest the meeting will be an afternoon affair.