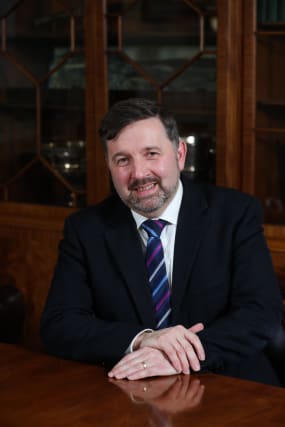 Stormont’s new health minister is to meet trade unions involved in ongoing strike action as other parties face questions as to why they avoided the portfolio.

Healthcare workers have been engaged in ongoing action to highlight concerns over pay and staffing shortages. The dispute has seen nurses strike for the first time ever in the UK.

“I am happy to confirm that contact has been made with trade unions and I will be meeting with them as soon as possible this week,” said Mr Swann.

“I’m looking forward to getting this dispute sorted right away. Obviously, the financial package for the new Executive and support from other Ministerial colleagues will be central to making that happen.

“We need our nurses and other health workers back at work. There’s a massive challenge for all of us in making our health service better and our great staff have a vital role to play in that.”

The crisis engulfing the region’s health service is arguably the most pressing priority of the restored powersharing executive.

However, when it came to the selection of the ministerial briefs during Saturday’s reconvened hearing of the Assembly, the DUP, Sinn Fein and SDLP all passed on the chance to select the health portfolio.

It has prompted claims that the other parties wanted to dodge what is viewed as the most challenging of the ministerial roles.

DUP Economy minister Diane Dodds insisted the issue should not be viewed as party political. She said Mr Swann was an executive minister, and all his ministerial colleagues wanted him to succeed.

“The health portfolio is absolutely vital to the success of this executive,” she told RTE.

“Robin Swann is not from my party but he will be my colleague in the executive and it will be absolutely vitally important that he is successful in that portfolio so his success will be the executive’s success and we need to work together.”

Sinn Fein, which held the health brief in the last executive, said it would directly support Mr Swann through its roles in the Executive Office and at the Department of Finance.

“On one portfolio or another, all of these issue are important, all of these issues impact and connect on each other in terms of how we prevent people even falling sick in the first place,” she told BBC NI’s Sunday Politics show.

Ms Hargey highlighted the first item on the agenda of the next executive would be resolving the pay dispute.

The SDLP’s Colin McGrath told the same programme his party would only have taken health if it had also controlled the finance department, so it could influence the budget allocation.

He said previous health ministers had seen their budgets “robbed” of millions of pounds by decisions taken elsewhere in the executive.

“I don’t think it’s about dodging health because we have always been very clear in saying that whoever has the health portfolio would be best to be somebody who had the finance ministry as well,” he said.

“And we are only able to get one ministry.”

The SDLP selected infrastructure as its chosen ministry.

The party had fifth choice under the d’hondt system for allocating seven executive ministries. Before that the DUP and Sinn Fein selected four other posts between them.

The UUP had sixth pick and only then health was selected. The party has insisted the brief was its number one choice.