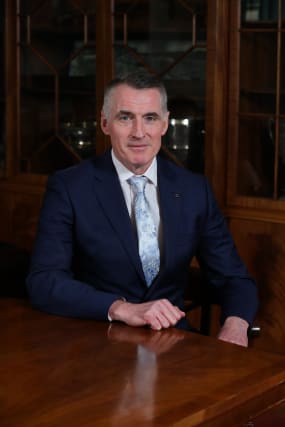 A deal to restore Stormont powersharing has created a “beachhead” to advance the debate toward a united Ireland, a Sinn Fein minister has said.

Declan Kearney, a newly appointed junior minister in the executive, said the institutions would work as an “engine” for moving to constitutional change.

But the DUP has insisted it will not tolerate any moves toward reunification and has characterised the deal as good for Northern Ireland’s place in the United Kingdom.

Mr Kearney, Sinn Fein’s national chairman, said he was confident a return to powersharing would create the circumstances to deliver Irish unity

He told RTE’s The Week In Politics: “I see it as an opportunity now to not only ensure that these institutions work in the interests of all sections of society and firmly on the basis of rights, equality and integrity but we have now got a landmark opportunity, a beachhead with which to advance the debate on constitutional change in the island and to take this as an engine for moving forward towards Irish unity and I am very confident that we have the circumstances to achieve that.”

“Arlene Foster (DUP First Minister) said yesterday in her speech that she will probably never agree with (Sinn Fein deputy First Minister) Michelle O’Neill’s interpretation of the past and we will certainly not agree with any moves toward a united Ireland,” she told the same programme on Sunday.

“But what people in Northern Ireland are demanding, no matter what tradition they come from, is that we actually work together to deliver on their priorities.

Ministers were appointed on Saturday as Assembly business resumed at Parliament Buildings.

All five of the main parties have entered the executive after endorsing a deal, tabled by the UK and Irish governments, that offered compromise resolutions to a range of long-standing disputes on issues such as the Irish language.

The “New Decade, New Approach” deal is accompanied by what the UK Government has promised will be a major investment package.

Government funding is set to help tackle a host of acute problems facing a public sector that has been floundering amid the governance vacuum.