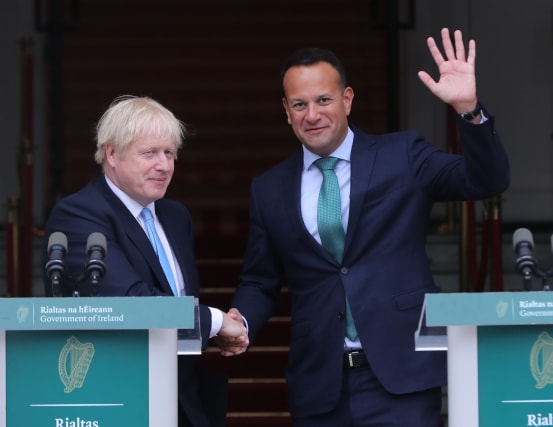 The Prime Minister and Taoiseach will meet the leaders of Northern Ireland’s restored powersharing executive on a visit to Belfast on Monday.

Their visit comes in the wake of the landmark deal, tabled by the UK and Irish governments, to restore the devolved institutions following three years of political deadlock in the region.

Mr Johnson can expect to face questions on the financial promises the Government made as part of efforts to get the “New Decade, New Approach” agreement over the line.

Northern Ireland Secretary Julian Smith pledged major investment to alleviate problems in the region’s struggling public services, but declined to confirm the sums involved until a deal was done.

The Irish government has also made financial pledges within the agreement to honour commitments to part-fund some north/south projects, such as the A5 dual carriageway and a redevelopment of the Ulster canal system.

Mr Johnson said discussions at Stormont would focus on how the executive intended to take forward “critical reforms” to public services.

“This is an historic time for the people of Northern Ireland,” he said ahead of the visit.

“After three years, Stormont is open for business again with an executive who can now move forward with improving people’s lives and delivering for all communities in Northern Ireland.

“I look forward to meeting with the new executive and hearing about their plans for the future – including driving forward much needed reforms to public services and resolving the current health strike.

“The next decade will be an incredible time of opportunity for Northern Ireland and the whole of the United Kingdom as we come together to unleash the potential of our four nations.”

Ministers will need to hit the ground running to tackle a host of acute problems facing a public sector that has been floundering amid the 36-month governance vacuum.

Top of the executive’s in-tray is an industrial dispute in the health service that has seen nurses take strike action on three occasions in the last month.