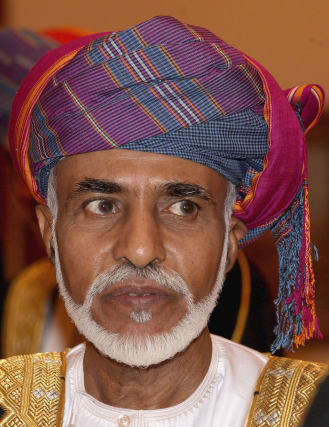 The Prime Minister has paid tribute to the ruler of Oman who has died aged 79.

Boris Johnson said he is “deeply saddened” by the death of Sultan Qaboos bin Said, describing him as “an exceptionally wise and respected leader who will be missed enormously”.

The Sandhurst-trained ruler came to power after seizing the throne from his father in a bloodless coup in 1970.

The Arab leader spent part of his early life in Suffolk, first studying in the area as an 18-year-old, then returning after spending a year serving with a British infantry battalion in Germany.

The Sultan studied a course on local government in the county and even held a brief post with Suffolk County Council.

Mr Johnson said: “He will be remembered for his devotion to the development of Oman into a stable and prosperous nation, and as the father of the nation who sought to improve the lives of the Omani people.

“I had the pleasure of meeting His Majesty Sultan Qaboos and was struck by his commitment to peace and understanding between nations and between faiths. He leaves a profound legacy, not only in Oman but across the region too.

“The UK is a proud friend and enduring partner of Oman, and our thoughts and prayers are with the Omani people.”

Just last month, the Duke of Cambridge had an audience with the Sultan at the Palace of Bait Al Baraka at the end of a four-day tour of Kuwait and Oman.

The Sultan was suffering from “diabetes and a history of colon cancer”, according to a report by the Washington Institute for Near-East Policy in December 2019.

Foreign Secretary Dominic Raab was among others paying tribute, describing the Middle East’s longest-serving leader as “widely respected” and saying he worked hard to “promote peace and stability in Oman and the wider region”.

Former prime minister Tony Blair said he heard about the death “with great sadness”, adding: “He was a leader of vision and purpose who took over the leadership of his country at a difficult time and raised it to an entirely new level of development and prosperity.

“He was a man of culture, humanity and deep conviction who strove to make his nation and the world better and more peaceful. He was kind, thoughtful and with a big heart.

“He had great wisdom and insight from which I benefited often as did so many others. My deepest sympathy, prayers and condolences are with the people of Oman. He will be sorely missed.”

Where his father ruled with an isolationist attitude, the sultan was determined to modernise the Middle Eastern country.

He was frustrated by the lack of progress made in Oman, at the time an isolated and insular country, despite the wealth provided by oil reserves and is credited with raising the standard of living.

One of his first steps as a ruler was to abolish slavery, before setting about using Oman’s oil revenues to bring the country into the 20th century.

He was an avid classical music fan who regularly took his personal 120-member orchestra with him on his travels.

The Sultan married his first cousin, Kamila, in 1976, but their marriage ended in divorce just three years later.

Members of the royal family, including the Queen and the Prince of Wales, have met the Sultan on a number of occasions.

The Queen and the sultan watched an equestrian event together in Oman in 2010, and back in 1982 were at a banquet in Claridge’s Hotel held in his honour.

In 1979, the sultan was at a dinner aboard the royal yacht Britannia.