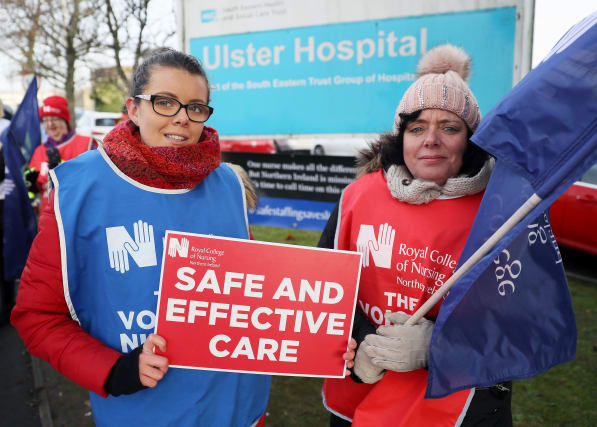 New Health Minister Robin Swann has urged Secretary of State Julian Smith to “step up for the people of Northern Ireland”.

The former Ulster Unionist Party leader took on the portfolio on Saturday during the first sitting of the Assembly in three years.

His nomination came as a surprise to some amid speculation that one of the two larger parties – the DUP or Sinn Fein – or his own party leader Steve Aiken would be minded to take on the role.

Health has dominated recent headlines after thousands of workers took strike action to demand pay parity with colleagues across the UK as well as increased staffing levels.

Mr Smith had been accused of blackmailing politicians to return to the Assembly by saying there was money to end the dispute, but it would only be delivered if the Executive was restored.

Within minutes of being elected, Mr Swann issued a challenge to the Secretary of State.

“We’ve stepped up and now he has to step up,” he said.

Mr Swann stepped down as leader of the UUP just a few months ago, saying at that time he had reflected on the impact it had on “my role as a husband and a father”.

However he has now rejoined front-line politics, and vowed health is a priority for his party.

He said: “Our party leader Steve Aiken made it clear through the Westminster campaign that health is a priority for the Ulster Unionist Party. We had the opportunity to take it so we have taken it.

“We heard commitment in both the first and deputy first ministers’ opening comments about how important health is, and they have both been very clear consistently that they don’t play party politics with that.

“I think we have got to a stage that the health service in Northern Ireland, something that we all cherish, has to be before party politics.

“The department officials are waiting now with a first day brief, I am leaving here now on a Saturday afternoon, this needs taken on now, the challenge needs to start now and we’re up for that.

“I’m going now to see what that brief is and then we’ll talk to the Secretary of State because he hasn’t made clear how much money is there, and see how we start to utilise that.”

Pat Cullen, director of the Royal College of Nursing in Northern Ireland whose members were among those who took strike action, said she hopes the day marks a new dawn in health care in the region.

She has asked for a meeting with Mr Swann, adding if they can get a formal assurance that their demands will be met then further industrial action may be suspended.

She said: “This is a momentous day, not just for the people of Northern Ireland but for nursing staff who have firmly put health at the top of the political agenda.

“There is no doubt that the courage and determination shown by nurses, alongside the unwavering support of patients and the public, has been instrumental in bringing us to where we are today.

“We welcome Robin Swann as our new Health Minister and call for an immediate meeting to begin the process of resolving our dispute about pay parity and safe staffing.

“We require strong political leadership and if we are able to get a formal assurance from our new Health Minister that our requirements will be met, we may be in a position to suspend further industrial action.”