Stormont – a parliament empty no longer 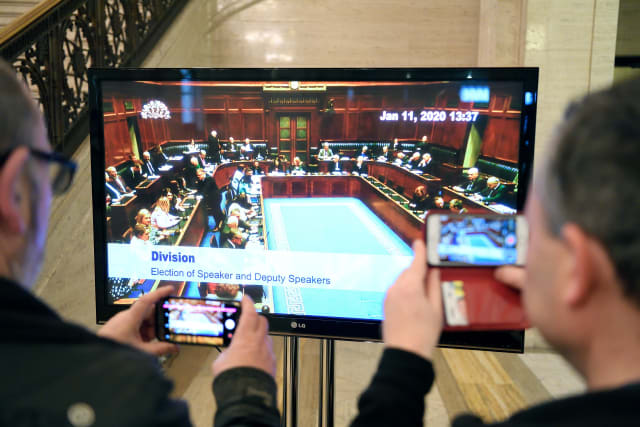 As she rose from her seat having been restored to the role she lost so dramatically three years ago, Arlene Foster was embraced by a party colleague.

She was then embraced by another. And another. One by one, members of the DUP’s Assembly team stopped to hug Northern Ireland’s reappointed first minister as they exited the chamber for a short recess.

On the other side of the benches, Michelle O’Neill was congratulated by her Sinn Fein colleagues.

She replaced the ailing Martin McGuinness weeks after Stormont collapsed and had waited ever since to take on the deputy first minister’s role her late political hero held for so long.

There was no warm embrace or handshake – given the past 36 months of dispute that was hardly likely – but their conversation was cordial and business-like nevertheless – a tone both will hope characterises the work of their restarted administration.

Earlier, they had struck notes of conciliation as they accepted the jobs.

“Let’s not re-fight battles of the past,” said the republican. “It is time to bring people together. We can open doors and we can let this future in.”

Her unionist rival notably referenced an Irish language phrase on a painting she was given by some Co Down schoolgirls.

“It has hung in my office upstairs ever since, just above my shoulder,” she said.

Of course it was not all bonhomie as the stalled work of the institutions resumed.

The fiery Jim Allister, who leads the Traditional Unionist Voice party, railed against the powersharing deal and denounced the DUP for re-entering government with Sinn Fein.

His will be a voice of dissidence that is not set to soften as the Assembly returns to day-to-day work.

Of course, a technical hiccup was to be expected three years on from the last full plenary session.

Above in the public gallery watched those who had come to witness another historic moment in Northern Ireland’s faltering journey from conflict to peace.

There were many familiar faces among them. Former Sinn Fein president Gerry Adams was there, as was the head of the Northern Ireland Civil Service David Sterling – a man now grateful to be relieved of the burden of running the region’s public services in a governance vacuum.

There were also senior officials from the Northern Ireland Office – one of whom was later heard expressing relief that the week of marathon negotiations that led up to the deal was finally over.

The sitting was done by 3.30pm – an hour ahead of schedule. Ministers were appointed and the rusty wheels of democracy were turning once again.

Outside in the Great Hall, little clusters of departmental officials and press officers hovered ready to pounce on their new ministers.

After most had been swept off for their first day briefings, one solitary official remained, looking somewhat concerned.

“Mine has probably slipped out the back door,” she said, only half joking.

There is a room in Parliament Building that was opened for the first time in three years this week.

Locked when the Assembly fell, it was like the land that time forgot.

Newspapers from January 2017 lay on desks along with a bottle of juice long past its use-by date.

That room will be filled with people again next week; as will many others in a parliament that is empty no longer.