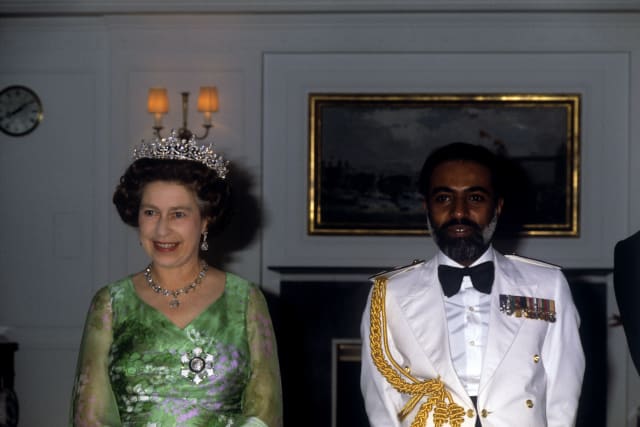 The Queen has said she is “deeply saddened” by the death of the ruler of Oman, whom she described as a “good friend” of the royal family.

Sultan Qaboos bin Said, 79, led the Gulf Arab country for half a century with “wise leadership” and a “commitment to peace and understanding between nations and between faiths”, read a statement from the Queen.

She said of the Middle East’s longest-serving ruler: “I was deeply saddened to hear of the death of His Majesty Sultan Qaboos bin Said al Said.

“His devotion to Oman, to its development and to the care of his people was an inspiration.

“He will be remembered for his wise leadership and his commitment to peace and understanding between nations and between faiths.

“He was a good friend of my family and of the United Kingdom, and we are thankful for all he did to further strengthen the bond of friendship between our countries.

“My State Visit to Oman in 2010 remains a cherished memory.”

A member of the royal family will be expected to travel to the country for the funeral of the ruler, who did not have any children.

The Sandhurst-trained leader came to power after seizing the throne from his father in a bloodless coup in 1970, and modernised the former British protectorate using its oil wealth.

He studied local government in Suffolk as an 18-year-old – even holding a brief post with Suffolk County Council – and also spent a year serving with a British infantry battalion in Germany.

Just last month, the Duke of Cambridge held an audience with the sultan at the Palace of Bait Al Baraka at the end of a four-day tour of Kuwait and Oman.

William said he was “truly honoured”, and that “it was clear from all those I met that he will be remembered with great affection”.

He added: “His Majesty was unwavering in his commitment to improve the lives of his people, and in his resolve to work towards regional stability. I am thankful for His Majesty’s many years of friendship with my family and the UK.”

No official cause of death has been released but he was suffering from “diabetes and a history of colon cancer”, according to a report by the Washington Institute for Near-East Policy in December 2019.

Prime Minister Boris Johnson paid tribute to “an exceptionally wise and respected leader who will be missed enormously”.

Mr Johnson said: “He will be remembered for his devotion to the development of Oman into a stable and prosperous nation, and as the father of the nation who sought to improve the lives of the Omani people.

He leaves a profound legacy, not only in Oman but across the region too.”

Where his father ruled with an isolationist attitude, the sultan was determined to modernise.

One of his first steps as a ruler was to abolish slavery, before using Oman’s oil revenues to bring the country into the 20th century.

He was an avid classical music aficionado who regularly took his personal 120-member orchestra with him on his travels.

The sultan married his first cousin, Kamila, in 1976, but their marriage ended in divorce just three years later.

Members of the royal family, including the Queen and the Prince of Wales, have met the sultan on a number of occasions.

The Queen and the sultan watched an equestrian event together in Oman in 2010, and back in 1982 were at a banquet in Claridge’s Hotel held in his honour.

In 1979, the sultan attended a dinner aboard the royal yacht Britannia.