Mixed responses to Harry and Meghan from papers 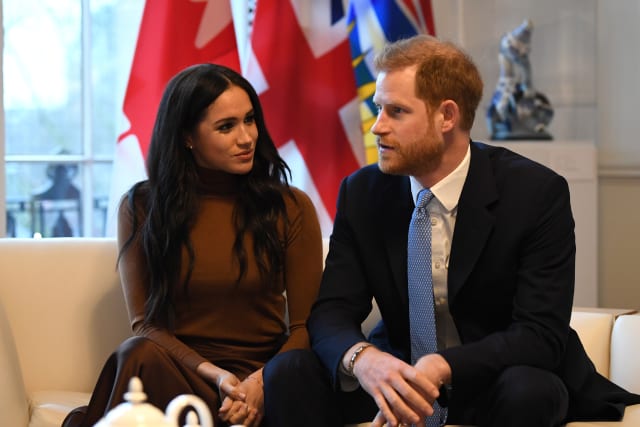 National newspapers have mixed responses to the Duke and Duchess of Sussex’s decision to step back from senior royal responsibilities.

An online poll of 1,000 people by JL Partners is reported by the Daily Mail as showing the couple should be “evicted from their Windsor cottage and be made to pay back the £2.4 million of public money spent on refurbishing it” and should financially support themselves.

But the poll shows Britons support the young royals’ decision to step back from frontline duties.

The paper’s editorial adds that “continuing to trade on their royal connections would be the height of hypocrisy”.

The Daily Mirror, one of three papers facing lawsuits from the couple, praises the Queen’s “bravery”, its front page quoting a source as saying: “When all around her is crumbling, she will steady the ship whatever it take.”

Columnist Fiona Phillips writes inside that the duke “has every right to be angry and protective of his own little family. And if he feels working outside the royal family is a means to that end, so be it.”

The Daily Express’s front page announces the “Queen is ready to cut a generous deal with her grandson Harry” which would allow the couple to step back from their official duties and continue “to receive royal funding”.

The editorial says the monarch’s “sense of duty is an example to all royals”, adding that the Sussexes “need to look at themselves and then judge themselves against the example of Harry’s grandmother”.

Under the banner of “A royal crisis” The Daily Telegraph reports the Queen has told courtiers she wants the “rift” within her family “repaired in 72 hours”, before Harry’s next scheduled public appearance.

Inside, columnist Charles Moore says that if “at all possible, a reconciliation should be found to avoid squandering an asset like Harry”, pointing to the duke’s “gifts of connection with all sorts of people”.

The Times reports palace aides have had to deny the couple are being “driven out” of the royal family, while Helen Rumbelow comments that the media’s treatment of the duke means he “feels like he’s been fighting in this theatre of war his entire life”.

And The Sun also leads with a friend of Harry saying the pair have been “driven out” as well as reporting US talk show host Oprah Winfrey “backed independence” for the couple.