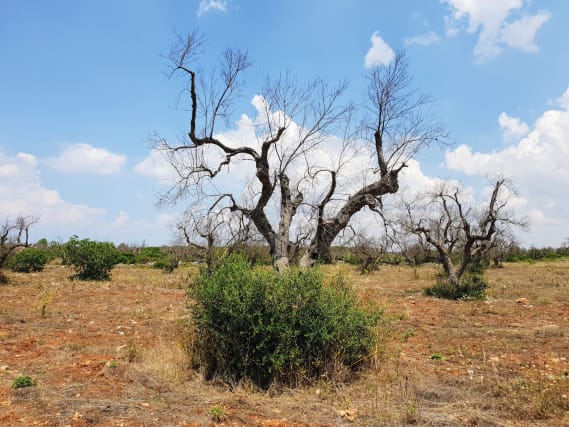 Dame Helen Mirren is backing efforts to keep deadly plant disease Xylella out of the UK by voicing an animation warning of the risks it poses.

The bacterium Xylella fastidiosa can infect more than 500 species of plant, including garden favourites such as lavender, oleander, rosemary and flowering cherry.

The disease, which has no known cure, is not present in the UK but has been on the march in Europe, devastating olive groves in Puglia, Italy, while outbreaks have also been found in France, Spain and Portugal.

In the four-minute animation, which explains the risks and tells gardeners what they can do to stop the spread of the disease to the UK, Dame Helen says she has seen firsthand the devastation done to olive trees in Italy.

The film, which portrays Xylella as space invaders attacking plants, aims to educate the public on the insect-borne disease, the symptoms, consequences of infection and the risks of bringing plants back from abroad.

The public are being asked to look out for symptoms, and report them to the TreeAlert service when the cause cannot be explained by other factors such as frost damage, drought or other common pests and diseases.

“Understanding what you can do to help keep it out of the UK is an important first step in protecting our precious plants for the future.”

The animation has been launched by Brigit, a consortium of 12 universities and research institutes led by the John Innes Centre and including the Royal Horticultural Society and the UK Centre for Ecology and Hydrology.

Gerard Clover, impact and engagement manager at Brigit, said: “Government and industry have long warned of the threat to our landscape and economy from Xylella but we shouldn’t be complacent.

“The disease continues to spread within Europe causing more than a billion euros-worth of damage and gardeners must be vigilant and report changes in the health of plants in their gardens.”

Advice to help prevent the introduction of Xylella includes sourcing new plants carefully, where possible purchasing plants grown in the UK, propagating plants from seeds and cuttings at home, checking plants for disease before purchase, monitoring the health of new plants and never bringing plants back with you from abroad.