Corbyn: There’s no excuse for shooting down Ukrainian passenger plane 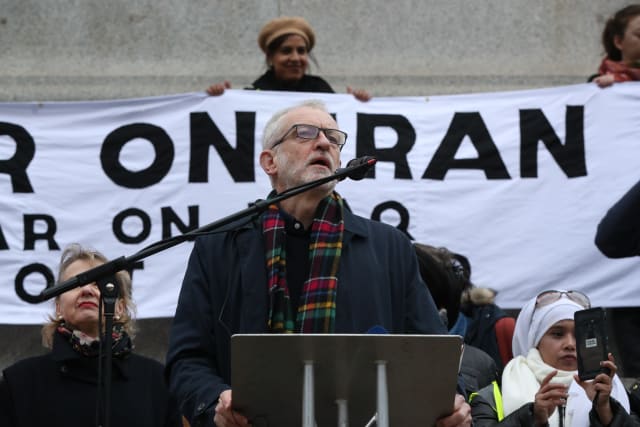 Labour leader Jeremy Corbyn has told a rally the shooting down of a passenger plane in Tehran was an “appalling act” for which there can be “no excuses”.

Addressing a “no war with Iran” protest in Trafalgar Square on Saturday, Mr Corbyn said the disaster, which killed 176 people including three Britons and 57 Canadians, was “part of a whole pattern of appalling acts across the region”.

Iran has admitted its military accidentally shot down the Ukrainian passenger plane amid heightened tensions with the United States over the killing of senior Iranian commander Qassem Soleimani in a drone strike on January 3.

Speaking to several hundred demonstrators, Mr Corbyn said: “Today let’s recognise the horror that the families of those that died in the airliner travelling from Tehran to the Ukraine are suffering from now.

“Let’s be clear there can be no excuses here.

“Let’s also recognise that that event and the events of the last few days and weeks have consequences.

“When big powers act illegally, when people step outside the norms of international law there are consequences.

“All this does is set off a spiral of violence and danger which will lead us to yet more wars in the future.”

Mr Corbyn, who also demanded the release of jailed British-Iranian mother Nazanin Zaghari-Ratcliffe, added: “I would want a British Government approach to this to be not to immediately side with the United States whatever the questions put before them, not to put ourselves into hock to President Trump because of a trade deal… but to stand up for international law, for peace and for justice all around the world.”

Despite the apparent ratcheting down of tensions between the US and Iran, demonstrators marched on Trafalgar Square demanding there should be no new conflict in the Gulf.

The British Government has defended the right of the US to act in self-defence while calling on both sides to de-escalate.

Nevertheless, the Stop the War coalition and Campaign for Nuclear Disarmament (CND) – which are organising the protest – argue the situation in the region remains critical.

Several hundred demonstrators chanted “one-two-three-four no to Trump, no to war” as they descended on the London landmark.

Retired headteacher Nasso Christou told PA: “We’re talking about war crimes committed by the so-called leader of the free world and our Government is standing by and supporting it – it’s outrageous.”

Asked about the plane being shot down, she added: “Would that have happened if Trump hadn’t set off this chain of events?”

Bryn Potter, a software developer, added: “It’s much more likely to press a button when the Americans are threatening to bomb.”

Legal researcher Giles Longley-Cook, 27, said: “It’s a horrible tragedy and people do get itchy trigger fingers and it’s more likely to happen when you escalate things to this level.”