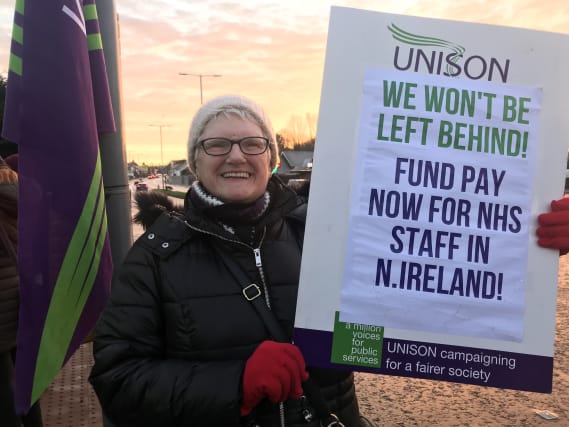 Thousands of health workers are staging another day of strike action across Northern Ireland.

Nurses and other staff are calling for pay parity with colleagues across the rest of the United Kingdom as well as an increase to staffing levels.

They gathered at picket lines at hospital sites across the region from 8am on Friday.

Thousands of appointments have been cancelled and a number of hospital and community services are affected by the action.

Reacting to news of the draft deal to restore powersharing announced by Mr Smith and Irish Tanaiste Simon Coveney on Thursday, Unison regional secretary Patricia McKeown said there may be some hope of resolution, but she added: “We are not there yet.

“However should the political process fail, we will pursue Julian Smith to act in the public interest, make the resources available and instruct the Department of Health to restore pay parity.

“If the money is there, it should be released without delay.”

At the Ulster Hospital on the outskirts of Belfast, health workers on the picket line included nurses coming off night shift.

Lindsay Thompson, an anaesthetic nurse and steward with the Royal College of Nursing, said those involved hope it will be the last day of strike action.

She told the PA news agency: “We’re here today for the third day of strikes, the feeling at the minute is one of disappointment that we have got to this point but we are hopeful the talks will lead to a resolution, pay parity will be reached and there will be a commitment to safe staffing and workforce planning.”

James Large, a pharmacy technician and branch secretary for Unison, described the mood on the picket lines as “determined”.

“There has been a lot of talk about the draft deal that has been issued by the two governments but our message has been very clear from the start, that we will not tolerate being used as political leverage in any talks process.

“Julian Smith should do the right thing and do it now, resolve this dispute. He stated this morning that the money is there but that it is on the basis of a deal between all the parties.”