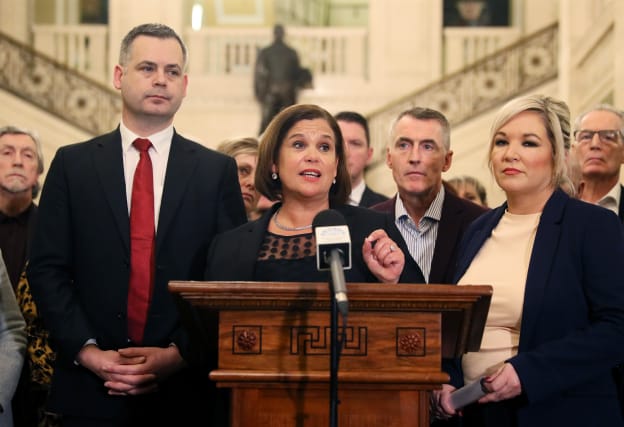 Powersharing is set to return to Northern Ireland after Sinn Fein joined the DUP leadership in backing a deal to re-enter devolved government together.

Sinn Fein President Mary Lou McDonald said a draft agreement tabled by the UK and Irish governments provided a basis to resurrect parliamentary institutions that have been down for three years.

The announcement came after a day of internal deliberations by the republican party.

It followed a similar announcement by DUP leader Arlene Foster on Thursday night – minutes after the text of governments’ proposals were published.

Peace process structures mean a ministerial executive can only function with the inclusion of the largest unionist party and largest nationalist party in the region.

There has been no confirmation when the Assembly will officially resume business and a new first and deputy first minister will be elected, but it could be as soon as Saturday.

“We now have the basis to restore power sharing, and we’re up for that,” said Ms McDonald.

“There’s no doubt there are serious challenges ahead; the impact of Brexit, austerity and other pressing issues.

“But the biggest and most significant challenge will be ensuring we have genuine power sharing build on equality, respect and integrity.

“I believe that the powersharing government can work. That requires everyone to step up. Sinn Féin’s commitment is to do all in our power to make this happen.”

The wide-ranging deal, which was published by the governments on Thursday night, contains compromise solutions to the vexed disputes at the heart of the 36-month powersharing impasse, such as legislative provisions for Irish language speakers.

Ms McDonald responded to those Irish language activists disappointed with provisions outlined in the deal. She insisted the ‘New Decade, New Approach’ agreement was only a start, predicting that more gains for language would come in the future.

“I would say to Irish language activists take heart from the fact that this is now an historic moment because for the first time we have official recognition,” she said.

The republican leader also insisted Sinn Fein was “committed” to Irish reunification efforts and to make sure all people across the north and south divide enjoyed the same rights.

The deal includes what the UK government has promised will be a major Treasury-funded financial package to tackle a host of acute problems facing a public sector that has been floundering amid the governance vacuum.

One of the most high profile of those is a high-profile industrial dispute in the health service which on Friday saw nurses again walk out on strike.