Powersharing returns to Northern Ireland as parties back Stormont deal 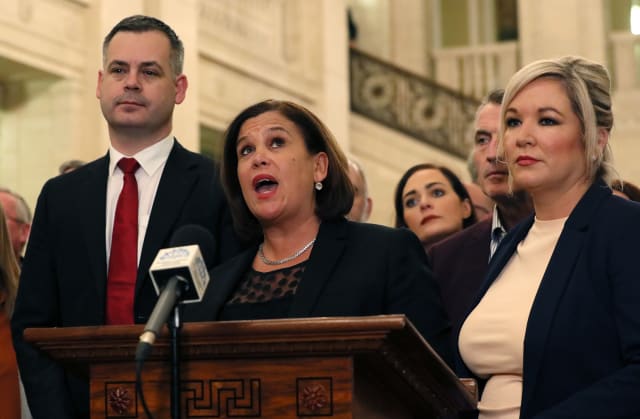 Powersharing is returning to Northern Ireland after Sinn Fein joined the DUP in backing a deal to re-enter devolved government together.

Sinn Fein President Mary Lou McDonald said a draft agreement tabled by the UK and Irish governments provided a basis to resurrect parliamentary institutions that have been down for three years.

The Assembly is likely to sit once again on Saturday afternoon, when a DUP First Minister and Sinn Fein Deputy First Minister will be elected along with a team of ministerial colleagues.

The SDLP has confirmed it will take up its entitlement to one ministry. There has yet been confirmation whether the Ulster Unionists and Alliance Party will also take seats in the executive, with both parties still engaged in internal discussions.

The wide-ranging deal, which was published by the governments on Thursday night, contains compromise solutions to the vexed disputes at the heart of the 36-month powersharing impasse, such as legislative provisions for Irish language speakers. It will also be accompanied by what the UK Government has promised will be a major investment package.

“We now have the basis to restore powersharing, and we’re up for that,” said Ms McDonald, making the landmark announcement in Parliament Buildings in Belfast.

The move, which came after a day of internal deliberations by the republican party, followed a similar announcement by DUP leader Arlene Foster on Thursday night.

The sign-off of both leaders was vital, as peace process structures mean a ministerial executive can only function with the inclusion of the largest unionist party and largest nationalist party in the region.

He tweeted: “A devolved government can now start delivering the reforms needed in our public services. After three years, it’s time to get back to work – for the people of Northern Ireland. #StormontDeal.”

Mrs Foster, who has experienced a turbulent number of years at the helm of the party, is now set to return as Northern Ireland’s First Minister.

She conceded there were parts of the deal that would be challenging for the people that she represents.

“But overall and on the whole I feel that it’s a fair and balanced deal and that’s why we were able to recommend it last night to our party officers and to the elected representatives,” she said.

Mrs Foster responded to criticism of the deal from the Orange Order and hard-line voices within unionism, such as Traditional Unionist Voice leader Jim Allister.

“I think if anybody reads the agreement they will see that it is a fair and balanced deal,” she said.

“But the biggest and most significant challenge will be ensuring we have genuine powersharing built on equality, respect and integrity,” she said.

“I believe that the powersharing government can work. That requires everyone to step up. Sinn Fein’s commitment is to do all in our power to make this happen.”

Ms McDonald responded to those Irish language activists disappointed with provisions outlined in the deal. She insisted the New Decade, New Approach agreement was only a start, predicting that more gains for language would come in the future.

“I would say to Irish language activists take heart from the fact that this is now a historic moment because for the first time we have official recognition,” she said.

The republican leader also insisted Sinn Fein was “committed” to Irish reunification efforts and to make sure all people across the north and south divide enjoyed the same rights.

SDLP leader Colum Eastwood said it was time to get down to work and deliver for the public.

“We have had big commitments from the two governments and other parties to ensure that the things that we are concerned about actually get done in this executive,” he said.

“That’s why we have taken the decision, as a party, to go into government to make sure that we can deliver for the people we are concerned about.

“We will go in, probably sceptically, but we will go in and we will do our best to deliver for the public.”

Government funding is set to help tackle a host of acute problems facing a public sector that has been floundering amid the governance vacuum.

One of the most high-profile of those is an industrial dispute in the health service which on Friday saw nurses again walk out on strike.

Mr Coveney said history has been made. Speaking to reporters in Dublin after Sinn Fein backed the deal, he said: “History is being made today. We now have confirmation from the two largest parties in Northern Ireland that they both are committed to re-entering an executive and establishing a functioning Stormont again.

“Of course, that is not the end of the story as we want this to be an all-party executive so I hope that the Alliance Party and SDLP will also be able to join Sinn Fein and the DUP in that new executive.

“We hope that it may be possible that executive will be formed tomorrow but if not tomorrow, certainly Monday and to build on the momentum that is being created in the past 24 hours so that people can see positive political activity, people working together and setting an example and signal of positivity and show that politics in Northern Ireland can be a force for good and brings people together.”