Powersharing could return to Northern Ireland on Friday 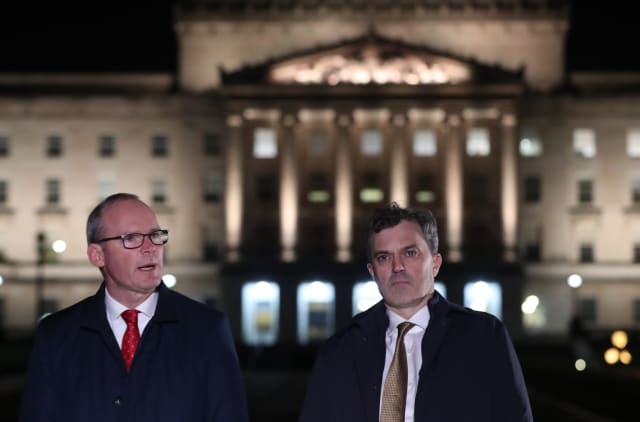 Northern Ireland could witness a return to powersharing on Friday after a dramatic night of developments in political efforts to resurrect devolution.

The UK and Irish governments jointly published a suggested deal late on Thursday and urged the five main parties to sign up and re-enter the institutions.

This came as Northern Ireland Secretary Julian Smith wrote to the speaker of the defunct Assembly requesting him to convene a sitting on Friday – so issuing a challenge to the parties to turn up and get back to business.

The DUP, the party blamed by both governments for holding up a deal in December, responded positively to the ‘New Decade, New Approach’ text published by the governments.

Party leader Arlene Foster said there was a basis to re-establish the devolved institutions in a “fair and balanced way”.

All eyes will now turn to Sinn Fein – the other party whose agreement is required to secure the return of a mandatory coalition executive.

The republican party has called a meeting of its ruling council to deliberate on the proposals to resolve long running wrangles on issues such as legislative protections for Irish language speakers.

It is understood the Ard Chomhairle (ruling council) will meet in Belfast around lunchtime.

The national officer board will meet in the morning and subsequently make a recommendation to the Ard Chomhairle members to either accept or reject the deal.

The events will all play out as workers in Northern Ireland’s crisis-hit health service stage another day of mass strike action over pay and staffing shortages.

With the UK government promising major financial support if devolution returns, Mr Smith said he had received assurances from trade union leaders that if the parties re-enter government they will call off the action.

Despite the secretary of state’s request, the Assembly authorities – in a post-midnight statement – made clear Speaker Robin Newton could only convene a sitting if the main parties indicated they had agreed a deal to form a new ministerial executive.

“The speed and timing of any sitting therefore depends entirely on when the Speaker hears positively from the parties,” said an Assembly spokeswoman.

“Now is decision time,” Mr Smith said as he stood in front of Parliament Buildings on Thursday night.

“We have had three years of talks, finally there is good deal on the table that all parties can support and on that basis I have tonight written to the speaker of this Assembly and asked him to recall it tomorrow to enable the restoration of the executive before the weekend.

Mr Coveney said the people needed to tell their MLAs to take the opportunity and seal the deal.

The deal represents the governments’ joint assessment of how long-standing wrangles can be resolved.

– The long impasse on the Irish language issue revolved around whether provisions would be enacted as a stand-alone piece of legislation or as part of a broader piece of legislation. The governments have proposed to do it by amending the 1998 Northern Ireland Act with three separate bills – one specifically dedicated to provisions for the Irish language.

– Reform of the petition of concern voting mechanism, which was originally designed to protect minority rights in Assembly votes.

– Improvements in how civil servants, special advisers and ministers conduct themselves following the Renewable Heat Incentive scandal which led to the Assembly collapse.

– More time to appoint a replacement if a Stormont First or Deputy First Minister resigns, as Sinn Fein’s Martin McGuinness did three years ago, bringing down the institutions.

Reacting to the publication, Ms Foster said: “On balance we believe there is a basis upon which the Assembly and Executive can (be) re-established in a fair and balanced way.”

Mr Coveney said the deal was not about winning or losing.

“I want to urge all political leaders and their teams to grab this opportunity and get back to work in a multi-party executive,” he said.

“Forget the language of win or lose – this is a deal filed with compromises.

“They are fair compromises but, most importantly, they are compromises in the interests of all of the people in Northern Ireland.”

Mr Coveney said there was no such thing as a “perfect deal” and political leaders had a choice – whether to meet the proposals with generosity or negativity.