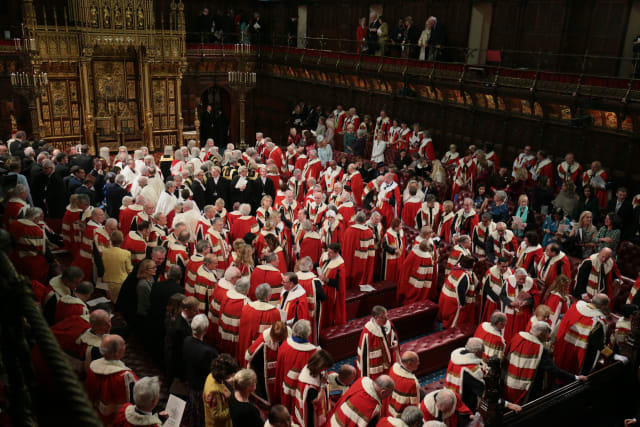 Peers have accused Boris Johnson of attempting to reduce Parliament to “passive observers” while he negotiates a trade deal with the European Union.

The Prime Minister’s European Union (Withdrawal Agreement) Bill comfortably cleared the Commons with a majority of 99 on Thursday and will head to the House of Lords next week for consideration.

But the Government has no majority in the upper chamber and, during Theresa May’s tenure, those on the red benches repeatedly dealt out defeats on Brexit.

The tone of a report by the Lords European Union Committee suggests Mr Johnson might also face a few dicey moments over the terms of his Brexit Bill.

In the 94-page document published on Friday, Brexit: The Revised Withdrawal Agreement And Political Declaration, peers weighed in to criticise changes made by the Government to the draft legislation since the thumping Conservative election victory last month.

The committee noted that a previous version of the Bill had “provided a framework” for Parliament to “approve” the UK’s future relationship with Brussels, affording MPs and peers a greater say over the upcoming negotiations.

But the concession, first made by Mr Johnson’s predecessor, Mrs May, in an attempt to pass her withdrawal terms, has been “omitted” in the re-written text, the committee observed.

“The lack of any provision in the Bill for the UK Parliament to scrutinise the future relationship negotiations is set in harsh relief compared to the role the European Parliament will play.

“MEPs will be able to undertake detailed and transparent scrutiny of future EU-UK negotiations while parliamentarians in Westminster will be reduced to passive observers.

“This lack of symmetry runs counter to the spirit and letter of ministerial undertakings given to parliament previously.”

The cross-bencher said his panel was “concerned” that “much of the detail” of the Withdrawal Agreement was being left to the UK-EU Joint Committee – a post-Brexit set-up that will be chaired by the European Commission and attended by a Government minister.

Lord Kinnoull described it as a body that “will not be subject to any parliamentary oversight and that may not even publish details of the decisions it reaches”.

“The country did deliver a very clear message that they want Brexit to be resolved,” the Prime Minister’s official spokesman said.

Brexit Secretary Steve Barclay said he anticipated “constructive scrutiny” from peers but added that he had “no doubt that their Lordships will have heard the resounding message from the British people on December 12”.

But in a sign of the battles that are expected to start on Monday, the Liberal Democrats – who have 94 peers – promised they would “continue to fight to hold the Government to account”.