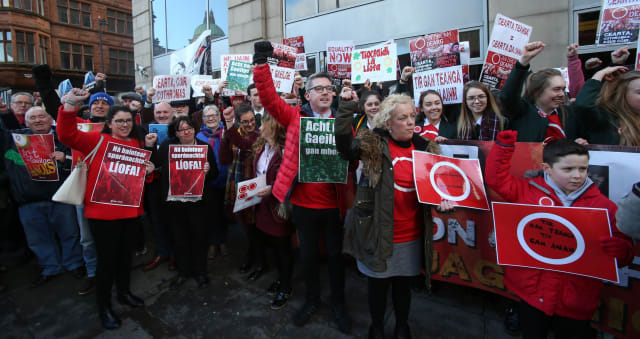 Irish language proposals represent an “historic advancement” on what came before, activists said.

But advocacy organisation Conradh na Gaeilge said provisions for bilingual signage and wider visibility fell far short of what was envisaged in the 2006 St Andrews Agreement.

It had been pressing for a separate stand-alone Irish language act.

Under the proposals, a special commissioner will work within parameters set by Stormont’s First and Deputy First ministers, and concerns remain among some speakers about a DUP veto.

Conradh na Gaeilge president Dr Niall Comer said: “This legislation is undoubtedly an historic advancement for our community, and for those who wish to use the language, by providing historic official status, legal protection and an Irish language commissioner for the first time in the history of the state.

“This has only come about as the result of a tireless, inspirational and bottom up campaign which has transformed how people here now view the language and ultimately how the state will interact with our community and shared language moving forward.”

The organisation’s Ciaran Mac Giolla Bhein said the proposals fall far short of the commitments made in the 2006 St Andrews Agreement, which promised an Irish language act based on the Welsh legislation, and does not contain provisions that are made for language in Wales or in the south, as was explicitly committed to by the British and Irish governments.

“The complete omission of visibility and signage is hugely frustrating and will undoubtedly be a source of tension and will expose major fault-lines on contested cases of signage in the coming period.”