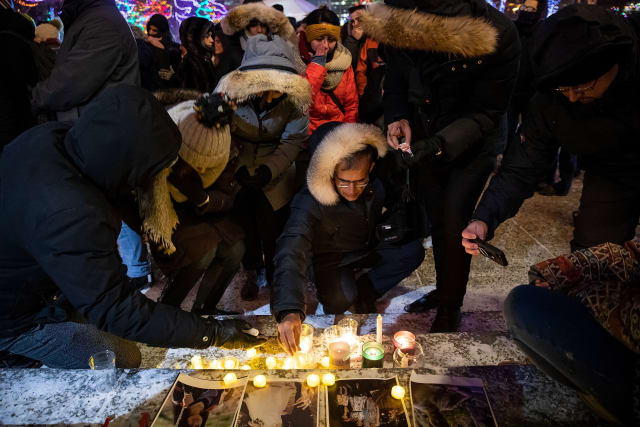 Grieving families deserve the “truth” about the cause of the Tehran plane crash, the Foreign Secretary has said, after Western leaders said intelligence suggested the jet was mistakenly shot down by an Iranian missile.

Dominic Raab echoed calls by the Prime Minister and his Canadian counterpart for a thorough investigation into the disaster which killed all 176 people on board the Ukrainian aircraft, saying Iran should “open up” the crash site to international investigators.

Late on Thursday, US officials said the plane appeared to have been unintentionally hit by a surface-to-air missile near Tehran hours after Iran launched ballistic missiles at two US bases in Iraq to avenge the killing of its top general, Qassem Soleimani, in an American air strike.

Boris Johnson said there was a “body of information” which indicated the aircraft was brought down by a missile and Candian PM Justin Trudeau said there was intelligence from multiple sources.

The New York Times has published a video which it said showed the moment a missile hit a plane above Parand, near Tehran’s airport, the area where the Ukrainian airliner stopped transmitting its signal before it crashed on Wednesday.

Iran has ruled out a missile strike by its air defences and initially suggested the cause was a fire in one of the plane’s engines.

Speaking in Canada, Mr Raab said: “We agree with the Canadian assessment that indicates that Ukrainian International Airlines flight 752 was shot down by an Iranian surface-to-air missile, and as (Canadian Foreign Minister) Francois-Philippe (Champagne) said it may well have been unintentional.

“Our view on the crash underlines why we urgently now need an independent, full and transparent investigation to establish what caused it.

“The Iranian regime must open up to the international community, including access to the crash site, so we can get to the truth as quickly as possible to give the families of the victims an understanding of what happened to their loved ones.

“The families of the victims deserve to know the truth, and we say that whether they’re Canadian families, British families, Ukrainian families, Swedish, German, Afghan.

“And let us not forget the Iranian families because they have suffered the greatest loss of life in this terrible incident and they deserve to know the truth too.

“We urge Iran not to repeat the reckless and dangerous attacks and rather pursue the urgent de-escalation and return to diplomatic dialogue.”

The Foreign and Commonwealth Office has advised British travellers against all air travel to, from and within Iran.

Earlier, Mr Johnson confirmed that four Britons died in the crash – up from earlier reports of three.

The Times named another of the victims as 17-year-old Arad Zarei, who went to school in Twickenham, south-west London, before moving to Canada.

The Boeing 737-800 plane crashed moments after it left Imam Khomeini International Airport in Tehran at 6.10am local time (2.40am GMT) on Wednesday, bound for the Ukrainian capital, Kyiv.

The airline ruled out human error in the aftermath of the incident, and the crew were not said to have made an emergency call.