CES 2020: The strangest gadgets from the tech show 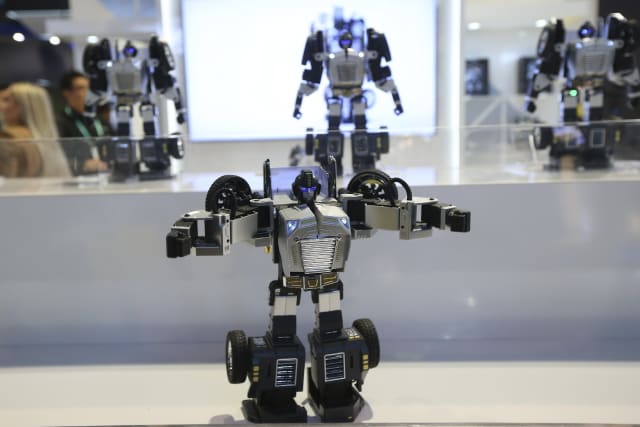 A robotic shark and dancing humanoid robots are among the more unusual gadgets on show at technology conference CES, offering a contrast to the new TVs and mobile devices that often headline the event.

The annual convention sees thousands of new devices introduced, including early prototypes which may never end up being released.

Here is a look at some of the more outlandish items to appear on the show floor at this year’s CES.

The firm behind this bionic robot fish – Robosea – say the Robo-Shark is designed to be an underwater drone capable of carrying out scientific research as well as general underwater monitoring and tracking.

They argue its shark form makes it easy to disguise, while its bionic tail propels movement meaning longer battery life as well as less noise when in operation.

Pet tech continues to be a growing trend at CES, and 2020 saw a wide range of devices aimed at cats, dogs and their owners.

One of the most interesting products on display is the Litter Robot, a large orb-shaped litter tray which is loaded with sensors that automatically scoop and clean out dirty litter after it’s been used by your cat.

The internal tray rotates after use – only coming to life when it senses your cat has left the tray – effectively sieving out dirty litter which is disposed into a box beneath the main tray, which can then be emptied out.

Segway’s newest take on personal transportation is an eye-catching one. The S-Pod looks like a large lounge chair, but is a self-balancing pod that can travel at up to 24 miles per hour.

Segway says its meant for enclosed campuses such as airports, theme parks and malls.

Every year the number of robots on show at CES aimed at entertaining people at home grows – from those that simply dance to those that can play certain games with and against you.

Uber has grand plans to introduce networks of flying taxis in the years to come, but the reality still feels some distance away.

However at CES this year the firm announced a new partnership with automotive giant Hyundai to manufacture Uber Air Taxis.

Not only that, but Hyundai came to Las Vegas with a fully-fledged concept vehicle, which dominated the company’s booth on the show floor.