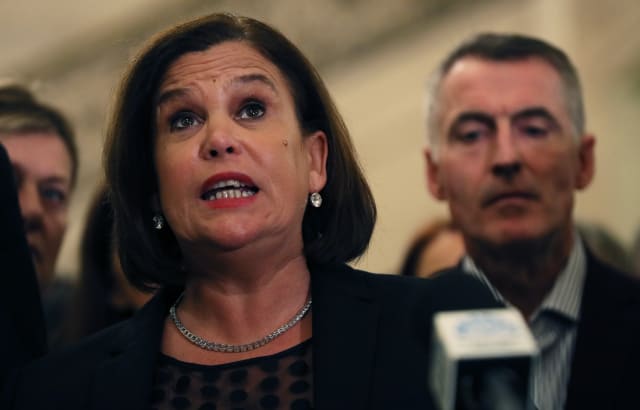 This is an historic “red letter” day for the Irish language, Sinn Fein’s president has declared.

Mary Lou McDonald said the decision to bestow official recognition was only the start and the language would evolve and deepen.

She added it was about marking a standard for inclusivity right across society.

“This is not about winners or losers, this is about a society that makes room for everyone.”

She said it was an important day for recognition of Irish identity.

She added: “I would say to Irish language activists take heart from the fact that this is now an historic moment because for the first time we have official recognition.”

She said everyone who embraced diversity and respect across the island of Ireland should regard that as a positive thing.

Activists who have campaigned to strengthen the place of Irish have given a guarded welcome to the deal.

They said the plan drafted by the British and Irish Governments following three years of talks with the Stormont parties fell far short of their key demand of a stand-alone Irish language act.

A commissioner would help protect the language while a translation hub would provide services across the devolved Government at Stormont.

The Sinn Fein leader dismissed suggestions the DUP could have a veto on the commissioner’s work due to its links to the First Minister and Deputy First Minister.

There would also be additional support for Ulster Scots, including in education.

Ms McDonald said: “There is a lot more work to do and I fully expect that Irish language activists will continue to press for progress, I encourage them to do that.”