What is in the new Stormont deal? 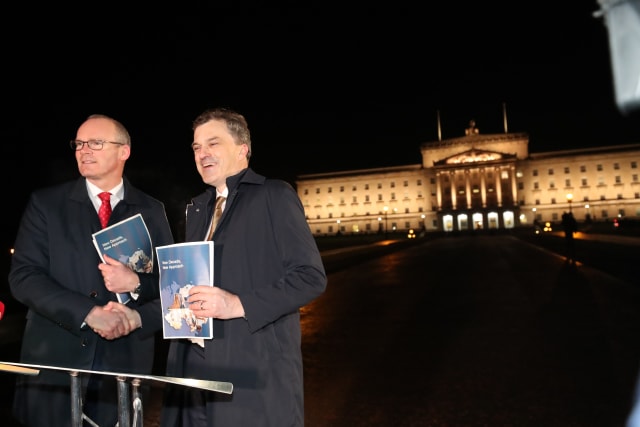 A central translation hub to provide Irish language services in Government is to be established as part of the proposed Stormont deal.

The devolved administration’s nine departments and associated bodies will avail of a unit allowing use of Irish and its unionist counterpart Ulster Scots.

Business at the Assembly may be conducted in both languages as well as English, with a simultaneous translation system as seen in the EU institutions.

An office of identity and cultural expression to promote respect for diversity, build social cohesion and reconciliation and support all aspects of cultural and linguistic heritage will be established.

An Irish language commissioner will recognise, support, protect and enhance its development and provide official recognition of its status.

A commissioner on the Ulster Scots/Ulster British tradition will enhance and develop the language, arts and literature associated with it and provide official recognition for its status.

The petition of concern, introduced following the 1998 peace accord to protect minority rights but later used to block change such as same-sex marriage, will be “reduced and returned to its intended purpose”.

The text said: “The parties will publicly commit to taking or supporting petitions of concern only in the most exceptional circumstances and as a last resort, having used every other available mechanism.”

The threshold for its triggering will remain at 30 Assembly members but will need the support of two or more parties.

Parties would agree that a three-year absence of devolved government cannot happen again and create a package of measures to deliver more sustainable and resilient institutions during periods of political difficulty.

That includes a party leaders’ forum, a sub-committee of the ministerial Executive on Brexit and measures strengthening the ability of Opposition parties to hold ministers to account.

If political tensions in future threaten break down of the institutions the agreement provides for a longer 24-week period before an Assembly election must be called. Ministers will remain in office in a caretaker capacity.

The collapse of the Assembly was caused by Sinn Fein concerns over how the DUP operated the botched Renewable Heat Incentive scheme.

Under the deal, ministers’ responsibility for their special advisers would be strengthened, details of their meetings with external organisations would be published as well as information about gifts and hospitality enjoyed by special advisers.

Requirements for record keeping and protections for whistleblowers would be strengthened.

The accountability of ministers to the Assembly and the need for its scrutiny committees to be provided with information would be made clear.

Priorities for new ministers, as widely envisaged, will include immediately settling the nurses’ pay dispute which has caused strike action and paralysed some services, reconfiguring hospitals and delivering extra nursing and midwifery undergraduate places.

It will also address problems such as mental health, alcohol and drugs abuse and tackle cancer.

The new ministerial Executive is also pledged to address resourcing pressures in schools and resolve the teachers’ industrial dispute.