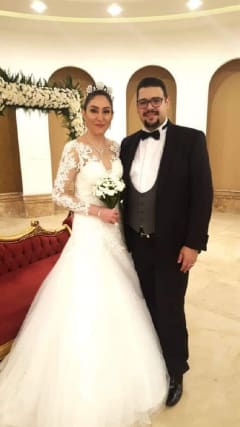 The newlyweds killed after a Ukrainian passenger plane crashed in Iran were travelling home to settle in London just two weeks after their wedding ceremony.

Niloufar Ebrahim, 34, died alongside her husband Saeed Tahmasebi Khademasadi, a 35-year-old engineer with Imperial College London, in the plane which crashed moments after taking off in Iran on Wednesday.

Mr Tahmasebi, a dual British-Iranian national, was among three Britons killed in the incident.

Ms Ebrahim was not yet a British citizen but was planning to settle in the UK with her new husband.

She had just completed her master’s degree at Kingston University and was doing charity work for VSO.

Downing Street said it is looking into “very concerning” reports about the crash, as the US claimed the jet was shot down by a missile.

Although legally married last year, Ms Ebrahim and Mr Tahmasebi, who lived in Chiswick, had travelled to Iran to celebrate their wedding with friends and family.

Ms Ebrahim’s sister, Navaz, told the PA news agency: “She was the biggest sweetheart. The best sister I could have asked for. She was brilliant and smart and kind — everyone who met her loved her.

“She was so well loved and we are devastated.”

The pair were set up by mutual friends in Iran several years ago, and Navaz said they “instantly” hit it off.

Navaz, who now lives in Texas, US, said she had been unable to see her sister for five years due to restrictive travel policies.

She said: “Because of the Trump travel ban, I was unable to attend her wedding because I am not allowed to leave the country.

“That alone was devastating at the time. I always thought I would get a chance to see her again, and we would meet again someday, but to not be able to do that breaks my heart.

“My family managed to get a visa to visit me in 2016, but because she was single at the time her visa wasn’t granted.”

The restrictive travel policies mean there is uncertainty about when Navaz will be able to see her family, who live in Iran, again.

“They had their whole lives ahead of them. They were such a happy couple, and the whole family is devastated,” she added.

The plane never made a radio call for help and was trying to turn back to the airport when it went down, killing 176 people.