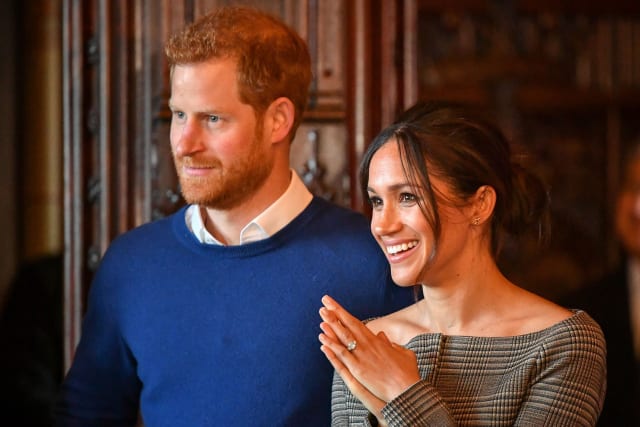 The Duke and Duchess of Sussex’s joint wealth could already be £18 million – but their desire to combine royal life with making money will be a “toxic mix”, an investigator into royal finances has said.

Harry and Meghan, who are stepping back as senior royals, announced their intention to become financially independent, while still continuing to support the Queen.

David McClure, a television producer and writer who examined the wealth of the royal family in his book Royal Legacy, told the PA news agency: “I don’t think it is going to work to be honest.

“It hasn’t been coordinated with the Palace who were blindsided by the announcement.

“The history of senior royals making money – the two is a toxic mix. It hasn’t worked well in the past.”

In 2002, the Earl and Countess of Wessex stepped down from their businesses to become full time royals after they were accused of cashing in on their royal status.

Sophie’s bid to win business from a bogus Arab sheikh for a public relations firm triggered a major review of the royals’ commercial conduct.

Mr McClure added: “How can you be half in, half out – half the week perform public duties and the other half earn your own income with TV, lectures, books? It is fraught with dangers.

“What happens if one of them is sponsored by a tobacco firm or something like that?”

Mr McClure said it was likely the couple would face a public backlash regarding the taxpayer-funded £2.4 million refurbishment of Frogmore Cottage in Windsor, with the couple now saying they will split their time between the UK and North America.

“I can see people legitimately kicking up a fuss about that.”

Security, which costs the taxpayer in excess of an estimated £100 million a year for the royal family as a whole, will also still fall to the British public to fund, according to the couple’s website which says they are classified as “internationally protected people” requiring armed security.

Additional security costs are likely as the Sussexes travel back and forth to Canada.

Mr McClure said: “You can’t really have your cake and eat it. At some point, they’ll have to decide whether they want to be inside or outside the royal family.”

Public relations expert Mark Borkowski has predicted the Sussexes stand to make a fortune due to the demand for their brand in countries such as China, India and the US.

But Buckingham Palace has already warned “these are complicated issues that will take time to work through”.

Harry inherited nearly £7 million from his late mother Diana, Princess of Wales, but this will have grown with investment.

He took control of the capital share of the sum when he was 30.

William and brother the Duke of Cambridge also inherited Diana’s dresses, including her famous ivory silk wedding gown, as well as her tiaras, other priceless jewels, family paintings, letters and home movies.

Harry is thought to have received money from the trust fund left by his great-grandmother the Queen Mother when she died in 2002, but the exact amount is not known.

Mr McClure said he estimated Harry’s wealth as between £10-15 million, while he suggested former actress Meghan was worth £2-3 million, which could be up to £18 million in total.

The duchess pocketed a reported £333,000 per season for six runs of the legal drama Suits, as well as earning an income from feature films and fashion collections.

Mr McClure said it was also a possibility the Queen could have already gifted some of her wealth to her grandchildren including Harry.

The Prince of Wales pays for the public duties of Harry and Meghan and the Duke and Duchess of Cambridge, and some of their private costs, out of his £21.6 million pound a year Duchy of Cornwall income.

Royal accounts showed that the prince’s bill for the Sussexes’ and the Cambridges’ activities, plus other expenditure including Charles’s capital expenditure and transfer to reserves, was £5.05 million in 2018-2019.

Clarence House’s annual report provides no detailed breakdown of the funding for the activities of the Sussexes and the Cambridges.

Sussexroyal.com said the couple will no longer receive funding through the Sovereign Grant from the taxpayer for their official office expenses – which it said accounted for 5% of their office costs.

But the Sovereign Grant is also used to pay for Harry and Meghan’s official royal travel, and their website said they “proudly” carry out official overseas visits in support of the Queen, suggesting they will still continue to do so.

When the duke and duchess flew to the South Pacific in 2018 for a major tour of Commonwealth countries they travelled by charter plane to Fiji and Tonga, which cost £81,000 in total including planning trips by royal aides.