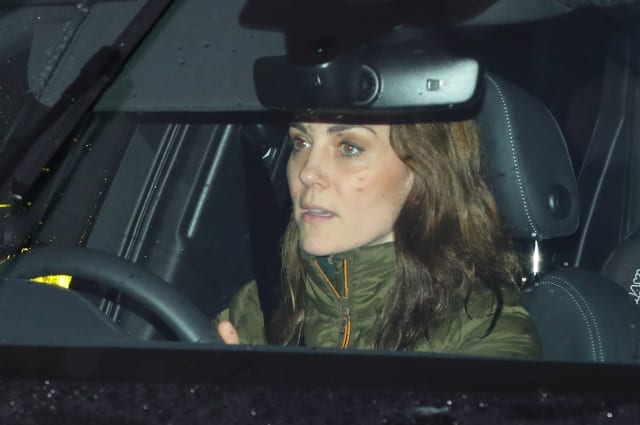 The Duke and Duchess of Sussex have wished the Duchess of Cambridge a happy 38th birthday – the day after their bombshell decision to step back as senior royals.

The comment read: “Wishing a very happy birthday to The Duchess of Cambridge today!” followed by emojis of a cake and a heart.

A serious-looking Kate was seen driving into Kensington Palace on the day of her birthday.

The Queen and the rest of the royal family, who were not consulted by Harry and Meghan before they released their statement, are getting to grips with its fallout.

The monarch has directed all four royal households to find “workable solutions” for the Sussexes within “days not weeks”, a Buckingham Palace source said.

The Palace’s official Twitter account shared three images of Kate with the monarch – just hours after Harry and Meghan made their announcement on the eve of the duchess’ birthday.

Clarence House also wished the duchess a “very Happy Birthday”, along with a series of photos of Kate with the Prince of Wales, the Duchess of Cornwall and the Duke of Cambridge.

Kensington Palace thanked the public for their “lovely messages”, alongside a previously unseen image of the duchess, casually dressed in jeans and jumper as she sits on a fence, by photographer Matt Porteous.

Kate faced reports of a rift with sister-in-law Meghan after the American actress wed Harry, followed by a falling-out between William and his brother.

Harry and Meghan also split their household from Kensington Palace, then left the Royal Foundation they shared with Kate and William.

In a television documentary, the Sussexes spoke of their struggles, with Harry saying he had “good days” and “bad days” in his relationship with William.

The Queen spoke in her Christmas Day address about the “bumpy” path the royal family and the nation had experienced over the last 12 months, but the Windsors are now beginning the new decade with a major upheaval.

The slimmed-down monarchy has shrunk further after star players Harry and Meghan said they intended to step back as senior royals, and become financially independent.

Many questions have been left unanswered about how this would work, with Buckingham Palace warning of “complicated issues”.

Kate married into the royal family in 2011 and became a future queen, and, amid the troubles faced by the Sussexes, is increasingly being seen as a stable and dependable part of the monarchy and its future.

The past year’s highlights for Kate have included a successful tour of Pakistan with William.

The couple visited the Hindu Kush mountain range, a traditional Kalash village and the Badshahi Mosque, played cricket and travelled in a tuk tuk.

The duke and duchess also had an unexpected extra night in Lahore after their plane was caught in a thunderstorm.

Louis celebrated his first birthday in April, and Kate took an excited Charlotte to her first day at school in September.

The duchess also co-created a wilderness garden for the Chelsea Flower Show, where her children paddled in the stream and had a go on the rope swing.

In an open letter marking the start of 2020’s designated Year of the Nurse and Midwife, she praised the care and kindness provided by midwives across the country.

Kate told midwives that her visit had given her “a broader insight into the true impact you have on everybody you help”.

The duchess attended Christmas Day church at Sandringham in Norfolk with the Queen and other members of the royal family.

And the Cambridges took George and Charlotte on the traditional festive outing for the first time.

Catherine Elizabeth Middleton was born to Carole and Michael Middleton at the Royal Berkshire Hospital in Reading on January 9 1982.

She was christened at the parish church of St Andrew’s Bradfield in Berkshire on June 20 1982.

Kate and her family lived in Amman in Jordan for a few years in the mid-1980s, where she attended a nursery school from the age of three, before returning to Berkshire.

At the age of 13, she went to the exclusive, private Marlborough College in Wiltshire, where she part-boarded.

She graduated in 2005 with a 2:1 in history of art from St Andrews University, where she met and began dating William, whom she married at Westminster Abbey on April 29 2011.

She was dubbed “Waity Katie” for her patience during their long courtship, and was described by William in their engagement interview as having “a really naughty sense of humour”.

Kate – now an HRH and a future queen consort – is patron of 19 charities and organisations, and has focused her charity work on helping children get the best possible start in life, particularly surrounding their mental health.