DUP not yet ready to sign up to powersharing deal 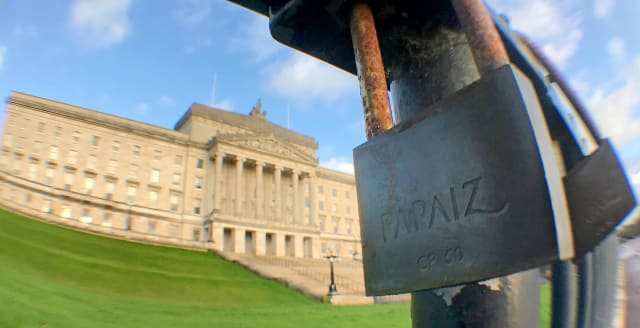 The DUP is working towards a deal to restore Stormont powersharing – but cannot yet sign up to proposals to revive the institutions, a senior MP has said.

Sir Jeffrey Donaldson, the DUP’s Westminster leader, was speaking after the party’s elected representatives met to discuss a draft text outlined by the UK and Irish governments.

The DUP and Sinn Fein, the two parties pivotal to any deal, were briefed on the governments’ blueprint on Wednesday afternoon.

The move has prompted intensive negotiations between the parties and the governments. The DUP and Sinn Fein have also held internal discussions on the proposals.

Proposed Irish language legislation; reform of a contentious Assembly voting mechanism; and plans to make the institutions less susceptible to collapse in the future are at the heart of the impasse.

Meanwhile, the three smaller parties involved in the process – the SDLP, Ulster Unionists and Alliance – have expressed frustration at delays getting sight of the text.

The parties are working to a Monday deadline to restore the institutions.

Sir Jeffrey said reforming Northern Ireland’s under-pressure health service was one of his party’s main concerns as nurses prepared to take another day of strike action on Friday.

“We are in a process of continuing to discuss these matters both internally and externally,” he said of a potential agreement.

“We continue to represent the interests of all of the people of Northern Ireland in seeking to get an agreement that ensures that this place is up and running again on a secure and sustainable basis.”

He said the DUP did not want to sign up to a deal only to encounter more problems in a few months’ time.

“Those are the kind of issues and priorities that we need to ensure are being properly and adequately addressed before we can put our hand to a deal we believe can have the support of a very clear majority of people in Northern Ireland,” he said.

DUP sources have downplayed the prospect of a breakthrough on Thursday night.

Earlier, Sinn Fein vice president Michelle O’Neill said her party was at Stormont to “do the business”.

“Our determination is to make politics work,” she said.

“It is going to take all of the parties to make the politics work.

Ms O’Neill insisted the deadline was a “real” one.

While the SDLP, Ulster Unionists and Alliance were told to come to Stormont House on Wednesday afternoon for their own briefings, 24 hours later those meetings had yet to happen.

There were conflicting reports as to whether the parties would finally get sight of the proposals on Thursday evening.

“If we fail at this point it would be unforgivable,” she said.

“Time is running out and that is why I say I am optimistic a deal will be done because to not do it is unforgivable.”

SDLP deputy leader Nichola Mallon said: “We are frustrated and our frustration is growing that we have as yet not seen text.

“We have pressed on the Government that we need to see that text today.”

She insisted her party would not be “bounced” into making a quick decision on the text when they did finally see it.

“We as the Ulster Unionists have a problem about making a decision, we haven’t even had a briefing on the paper, never mind sight of the proposed resolution to what is going on.”

The developments came on the third anniversary of the late deputy first minister Martin McGuinness’s resignation – a move that triggered the collapse of the devolved institutions at Stormont.

Three years on, the DUP and Sinn Fein are still at odds on several key issues.

The talks are happening amid continuing industrial action by workers in Northern Ireland’s crisis-hit health service.

Thousands of healthcare workers are due to strike again on Friday.