DUP indicates it will back deal to restore Stormont powersharing 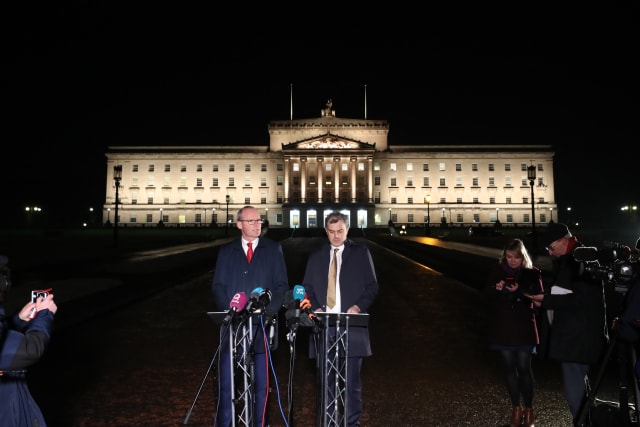 The DUP has signalled support for a deal to restore powersharing in Northern Ireland tabled by the UK and Irish governments.

Party leader Arlene Foster said it represented a basis to re-establish the devolved institutions in a “fair and balanced way”.

Sinn Fein, the other party whose buy-in is a must, has called a meeting of its ruling council on Friday to deliberate on the proposals to resolve long running wrangles on issues such as the Irish language.

In a bold move, Northern Ireland Secretary Julian Smith has asked for the Assembly to be recalled on Friday in the hope the parties will turn up and sign up to the deal.

Friday is due to see a strike by healthcare workers in the region.

Mr Smith said there was a major financial package on offer from the Government, which would mean strike action would not need to go ahead if the parties restored the institutions.

If Friday goes as the governments intend it, Northern Ireland could finally have a new government, three years after the last DUP/Sinn Fein-led coalition collapsed.

“We have had three years of talks, finally there is good deal on the table that all parties can support and on that basis I have tonight written to the speaker of this Assembly and asked him to recall it tomorrow to enable the restoration of the executive before the weekend.

Mr Coveney said the people needed to tell their politicians to take the opportunity and seal the deal.

The deal represents the governments’ joint assessment of how long-standing wrangles on issues such as the Irish language can be resolved.

– The petition of concern, which was originally designed to protect minority rights in Assembly votes, will be reformed into a means of building consensus and will not be used as a veto by any one party.

– Improvements in how civil servants, special advisers and ministers conduct themselves following a botched green energy scheme which led to the Assembly collapse.

– More time to appoint a replacement if a Stormont First or deputy First Minister resigns, as Sinn Fein’s Martin McGuinness did three years ago, bringing down the institutions.

Reacting to the publication, Ms Foster said: “This is a Government paper. Our Party Officers, Assembly and Parliamentary representatives considered the paper on Thursday.

“On balance we believe there is a basis upon which the Assembly and Executive can (be) re-established in a fair and balanced way.”

Mr Coveney said political leaders had a choice – whether to meet the proposals with generosity or negativity.

“There is no such thing as a perfect deal and that is why parties have to make choices as to how they respond,” he said.

“This is the opportunity for people to take – the alternatives are not good.”

The impasse has focused on proposals for Irish language legislation; reform of a contentious Assembly voting mechanism; and plans to make the institutions less susceptible to collapse in the future.