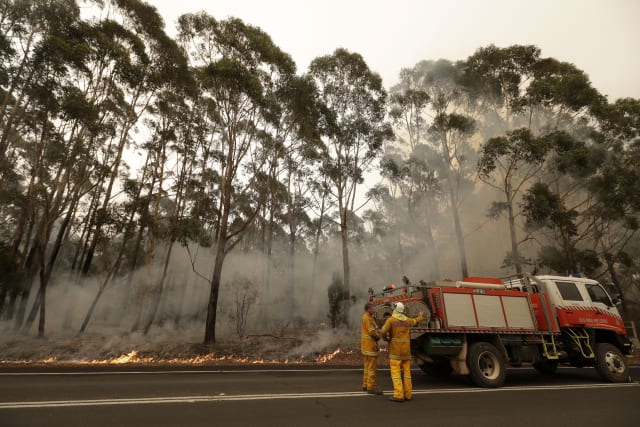 A volunteer tackling the devastating wildfires in Australia has said donations from the UK and beyond show firefighters “the world is watching and the world cares”.

Stephen McDonald, a British-Australian who has been helping fight the wildfires, said he has been “stunned” by the compassion of Britons.

The aid worker for Save the Children in Australia has been helping tackle the wildfires since they began in September 2019, and spoke to the PA news agency while on a trip to the UK for meetings with the charity.

He said seeing donations pour in has boosted the morale of volunteers battling 40 degree heat for up to 20 hours a day.

Mr McDonald, who is among tens of thousands of volunteers tackling fires in the state of Victoria, said: “Financial support is being offered from people all over the world, and it’s not just celebrities tipping in, or tennis players making commitments, but it’s places like Vanuatu who are normally recipients of aid, who have made donations and provided support.

“It’s really difficult for people to make a hands-on contribution from places like the UK, and so if they feel they would like to make a financial contribution to one of the bush-fire appeals, I think they can have confidence those funds will be used responsibly,” he added.

“The message it sends to the firefighters, is the world is watching, and the world cares.”

Mr McDonald, who lives in Melbourne, Australia, added: “The level of interest and level of compassion we’ve seen from people in the UK blows me away, I was stunned to arrive and have people actively wanting to talk to me about what was going on, and share their concerns and compassion, about not just what was happening to people but to the wildlife and the environment as well.”

He said a “family ethos” drove him to volunteer to tackle the fires, as his parents met as volunteer firefighters in Glasgow, and his children are also helping the community efforts in Australia.

The charity worker has been a volunteer firefighter for 10 years but he said the scale and ferocity of this year’s fires is “unprecedented” and “does feel worse” than anything he has experienced before.

Mr McDonald said: “What’s happening is all the heat and all the energy which has been generated by these fires is being caught up in the smoke cloud – we call them pyrocumulus clouds – and they’re generating their own weather systems within them.

“So we’re getting lightning strikes which spark more fires, you’re getting fire tornadoes being generated, and extreme winds, and what happens is the weather systems inside these fires are creating more unpredictable conditions.

“So we could normally say that if a fire’s occurring, and the wind direction is coming from one particular place, we can predict where the fire is going to run to.

“What’s happening is that the size of these fires and the amount of energy that’s in these weather systems is making it far less predictable for firefighters on the ground to be able to respond.”

He added: “To know that people are suffering, and people have died and livelihoods have been lost, farm animals and wildlife have been killed or injured, it does take a toll on people (…)

“The thing that’s really struck me is that amidst all of this tragedy, the level of community and international solidarity is really quite humbling.

“It’s humbling and it makes you feel like you’re part of something bigger than what you’re dealing with in front of you.”

Volunteer firefighters in Australia train for six months before facing the fires to ensure they can operate safely.

Mr McDonald said the Australian government is doing all that it can in the face of the fires, and commended “extraordinary leadership” shown by those in charge, particularly the commissioner of the New South Wales Rural Fire Service, Shane Fitzsimmons.

He said: “I think the fact the federal government has committed financial support as well as mobilising the resources of the Australian defence force is testament to how seriously everyone is taking this.”

Nationwide, at least 25 people have been killed and 2,000 homes destroyed by the blazes, and the fires are expected to rage for another three to four months.