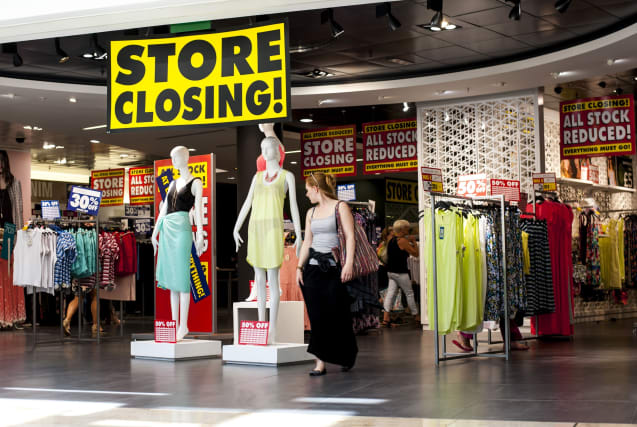 Retailers have suffered their worst year on record as overall sales fell for the first time, according to the latest figures.

BRC chief executive Helen Dickinson said: “2019 was the worst year since our records began in 1995 and the first year to show an overall decline in retail sales. This was also reflected in the CVAs, shop closures and job losses that the industry suffered in 2019.

“Twice the UK faced the prospect of a no-deal Brexit, as well as political instability that concluded in a December general election – further weakening demand for the festive period.”

Combining November and December together to iron out Black Friday distortions – the sales event fell in December this year rather than November in 2018 – total sales were down 0.9% compared with the same period a year ago.

Over the three months to December, non-food retail sales fell by 1.4% on a total basis – below the 12-month average decrease of 1.3%.

Over November and December together, non-food sales online increased 2.6%, lower than the 12-month average of 3.3%.

Meanwhile, separate figures from Barclaycard show that consumer spending reached just 1% year-on-year growth in December as supermarkets saw a downturn of 0.9% and specialist retailers such as toys and gaming stores suffered a 4% drop.

However, cinema sales increased by 19% as Star Wars and Frozen II drew in crowds, while spending in pubs and on takeaways was up 11.7% and 12.5% respectively over the festive period.

A poll for Barclaycard found 41% of consumers felt renewed confidence in the UK economy following the general election, up 10 percentage points on November and the highest level throughout all of 2019.

“This optimism hasn’t yet translated into high street sales, but spending on experiences continues to grow, with Brits enjoying box office hits and trips to the pub. While consumers remain reluctant to spend on big ticket items, the mood seems to be changing.”

Ms Dickinson added: “Black Friday overtook Christmas as the biggest shopping week of the year for non-food items. Retailers also faced challenges as consumers became both more cautious and more conscientious as they went about their Christmas shopping.

“Looking forward, the public’s confidence in Britain’s trade negotiations will have a big impact on spending over the coming year. There are many ongoing challenges for retailers: to drive up productivity, continue to raise wages, improve recyclability of products and cut waste.

“However, this takes resources, so it is essential the new Government makes good on its promise to review, and then reform the broken business rates system which sees retail pay 25% of all business rates, while accounting for 5% of the economy.”

Susan Barratt, chief executive of the IGD food and drink trade body, said: ““December’s food and grocery sales ended 2019 on a downbeat note. Despite the influence of some inflation across the market, shopper spending was not as expected for such a key sales period.

“As a result, while the value of spending wasn’t down, growth was negligible and volumes declined – a rarity for Christmas in recent times.”