Relationship between Westminster and Holyrood ‘at low ebb’ 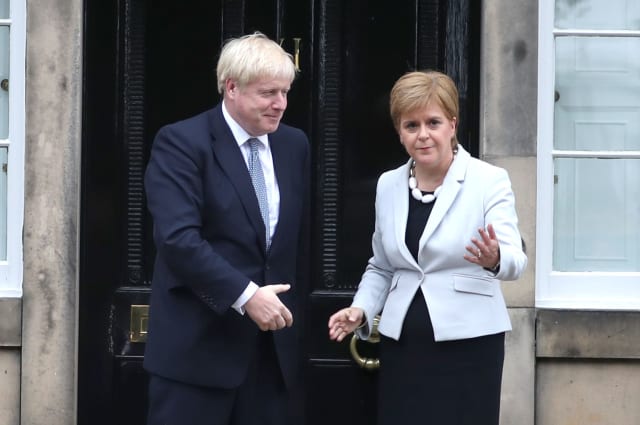 The relationship between Holyrood and Westminster is at a “low ebb” and has deteriorated since Boris Johnson’s election victory, Scotland’s Constitutional Relations Secretary has said.

Mike Russell claimed the UK Government had shown devolved nations “scant – if any – respect” and predicted it will ignore the Scottish Parliament’s views on the Prime Minister’s Brexit deal.

Under the devolution agreement, Westminster must seek legislative consent for issues affecting devolved policy areas but, in practice, the UK Government could still proceed against the will of the Scottish, Welsh or Northern Irish administrations.

With MSPs likely to withhold consent for Mr Johnson’s Withdrawal Agreement in a vote, Mr Russell told the Scottish Parliament’s Constitution Committee it was a “thoroughly bad Bill that prefaces a thoroughly bad Brexit”.

Revealing the state of relations between the two Governments ahead of a Joint Ministerial Committee, Mr Russell said: “There has been scant, if any, respect for the devolved administrations, very little, if any, for the devolved competencies and a view that when push comes to shove the UK Government can do precisely what it wishes to do.”

He ascribed some of the blame to the “considerable nervousness within the UK’s civil service about what is taking place and how it’s taking place” and said: “It’s fair to say that normal relationships which I’ve been used to as a minister these last 12 years are at a low ebb from officials as well as ministers.

The Prime Minister’s Withdrawal Agreement would give Westminster powers over devolved areas but the Scottish Government said they only learned of the Bill’s details the day before its publication.

Addressing comments from the UK Government thanking Holyrood for its input to the Bill, Mr Russell said: “They say that they work with the devolved administrations as if everything was wonderful – it isn’t wonderful.

“It’s an extraordinarily difficult set of relations that have got even worse since the Johnson Government got elected.”

Mr Russell was asked by the SNP’s Angela Constance about problems for EU citizens in the UK who are “having to apply for rights they already have”.

Arguing there are practical problems with the settled status scheme as well as ethical concerns, Mr Russell said: “This isn’t a particularly well-run scheme and it’s producing results that are unacceptable for some people.

“But there’s the political and moral objection to people who have spent some of them their entire working lives in this country as citizens working alongside all of us and are now being told they will only have the right to stay if they go through this process which they find offensive.”

He also raised concerns about the Withdrawal Agreement’s apparent changes in Clause 26 that would mean courts are no longer bound by previous judgements by European Courts.

Citing the Scottish Government’s Fair Work agenda as being “based upon the rights and protections that exist in the European Union”, Mr Russell warned the UK Government wants to “cut and remove” workers’ rights.

“I don’t think there’s any doubt about it.”