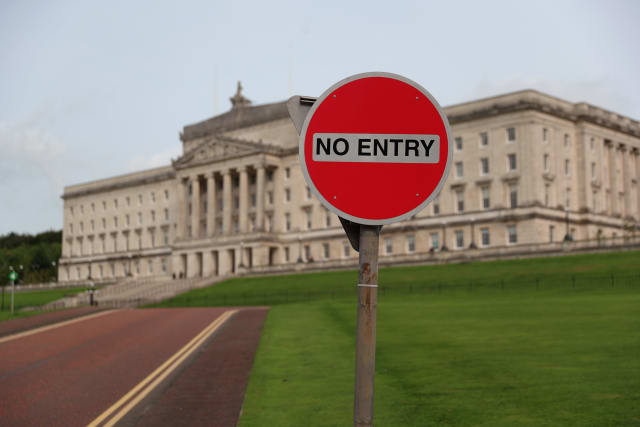 The UK and Irish governments are outlining proposals to restore powersharing in Northern Ireland to the main Stormont parties.

The meetings at Stormont House in Belfast come at a pivotal moment in efforts to resurrect the defunct institutions.

It is understood the DUP and Sinn Fein were orally briefed on the text of the document late on Wednesday afternoon, with the three smaller parties – the SDLP, Ulster Unionists and Alliance – then invited in for their own individual briefings.

The developments took place amid a strike by nurses in Northern Ireland’s crisis-hit health service.

Secretary of State Julian Smith and Irish Foreign Affairs minister Simon Coveney, who were in talks to finalise the text until 1am overnight, are urging the parties to sign up to suggested proposals to address the vexed issues at the heart of the three-year impasse.

The briefings followed two roundtable meetings of all five parties convened by Mr Smith and Mr Coveney earlier in the day.

The events at Stormont came as Prime Minister Boris Johnson, addressing the Commons, urged the region’s politicians to “take responsibility” and get the institutions up and running again.

Ongoing industrial action by health workers has heaped pressure on the political leaders to get back into a devolved Assembly.

Thousands of nurses are on picket lines at hospitals across the country amid a dispute over pay and staffing shortages.

Anne Waterman, 60, a staff nurse striking outside the Ulster Hospital, less than a mile from the gates of Stormont, delivered a stark message to the rowing politicians.

“If I was to stop working for three years I would not be getting paid, I think politicians here really have to step up to the mark, speak up for us and support us because we do not know what else to do,” she said.

Proposed legislative protections for Irish language speakers and reform of a contentious Stormont voting mechanism – called the petition of concern – have been the crucial sticking points in the most recent talks process, which got under way following the UK general election.

Sinn Fein has previously demanded a stand-alone Irish Language Act as a prerequisite of any deal to restore devolution.

The long-running dispute has boiled down to whether new laws are contained in a stand-alone Bill or as part of a wider piece of legislation.