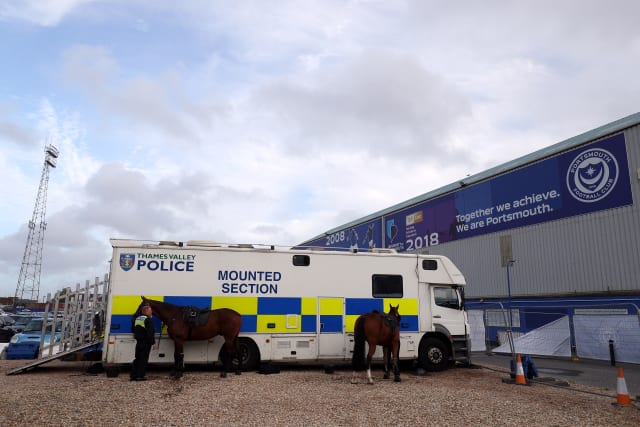 Police have issued photographs of 17 fans wanted for throwing a bottle and other items at officers and other supporters following a match between rival football clubs Portsmouth and Southampton.

The Carabao Cup match held in Portsmouth on September 24 saw the largest-ever deployment by Hampshire Police to a football match.

Now the force has released the images in a bid to track down those responsible for throwing items after the game had finished.

A spokesman said: “Our priority was to keep people safe and, fortunately, as a result of our careful planning, our policing operation achieved that.

“Regrettably, however, there were a small number of people who were intent on trying to cause disorder as the fans left the stadium.

“In Goldsmith Avenue, after the match, we had several reports of items being thrown at police officers and fans. Fortunately, no-one was seriously injured.

“Since the match, our dedicated football officers have been analysing CCTV and footage from the body-worn cameras of officers to investigate the exact circumstances of what happened and ensure those responsible are held accountable for their actions.

“We also had a report of a bottle being thrown from the Lower North stand in Fratton Park shortly after the final whistle.

“Now we are after your help to identify the people in these images as we believe they can help with our investigations.”

Detective Chief Inspector John McGonigle said: “There were a large number of people in this area at the time who will have no doubt seen others throwing items at our officers and other fans.

“We need to hear from you because we need to work together to ensure these people are held responsible for their actions, so that they cannot put the safety of others at risk again at future matches.

“They cannot be allowed to ruin the reputation of the genuine fans who simply went to enjoy the game.”