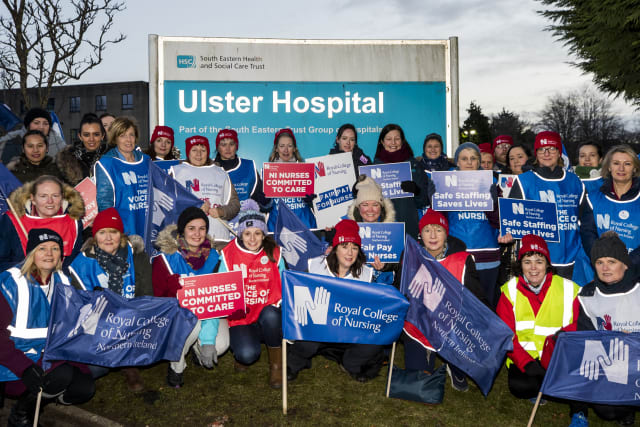 Nurses are burned out by increased demand and inadequate numbers, a demonstrator has said.

Thousands of nursing staff are taking another day of strike action in a row with NHS bosses over pay and conditions in Northern Ireland’s under-pressure health system.

The protest follows a similar walkout last month over salary rates that lag behind colleagues in Great Britain and staff shortages.

Lyndsay Thomson, 30, from Bangor in Co Down, who works as a staff nurse in anaesthetics at the Ulster Hospital, said: “We cannot retain or recruit staff and staff are just at the point of burn-out.”

Anne Waterman, 60, a staff nurse from Belfast involved in day procedures at the same hospital, joined a noisy picket line and added: “I know people hear us but we really need to be listened to and we don’t know what else to do at the minute other than this.”

More than 2,000 appointments and procedures have been cancelled due to the walkout, including several Caesarean operations.

Stormont’s Department of Health has urged trade unions to return to talks.

They broke down without agreement in December, when a fresh 3.1% pay offer was rejected by unions who want pay parity with the rest of the UK.

Ms Waterman began nursing in 1977 and said medical care had seen enormous improvements since then.

Patients are living longer and being looked after better and more treatments are being offered.

But the ageing population is heaping extra pressure on nursing.

She stood on the side of an arterial route into Belfast with colleagues, waving as passing motorists sounded their horns on a sunny winter morning.

Ms Waterman called for action from Stormont’s political leaders, who are attempting to restore devolved powersharing.

She added: “If I was to stop working for three years I would not be getting paid, I think politicians here really have to step up to the mark, speak up for us and support us because we do not know what else to do.”

The country has some of the longest waiting lists for treatment in the UK, and political paralysis at Stormont has hampered efforts to address problems.

Ms Waterman said so many posts are vacant that extra pressure is put on staff who are able to work.

“Patient safety is being put at risk every day and nurses have said that enough is enough,” she added.

“We have escalated our concerns at every level and we now are at the point where this is what we need to do to make sure that our voice is being heard, that we are getting our point across, that this cannot keep going on.”